Star Plus' Hamari Devrani, produced by Shobhna Desai which went thro' a major twist recently with the happy reunion of the entire Nanavati family, courtesy the plans of Mohan and Bhakti is all set for another achievement!! 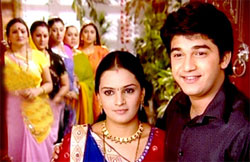 Featured Video
The show which has been very consistent in its ratings at the afternoon slot will soon be completing 300 episodes on August 12th.

Talking about this feat, Story and Screenplay Writer Raakesh Paswan said, "It's quite an achievement to complete 300 episodes at the afternoon slot. We have been doing consistently well with ratings post the strike, and the future track too has much more coming for the viewers".

The present track has the entire family living under one roof, but circumstances will soon bring about a difference between the Jethanis and Bhakti. According to our source, "The five Jethanis who were together when they were vampish in nature have turned good now, but they find themselves separated as they have different opinions to certain situational changes occurring in the house. The fact that Bhakti gets more importance in the house does not go well with Manjula Bhabhi and Rajeshwari. Also, the focus in the coming track will be more on the situations that force Manjula and Rajeshwari to go against Bhakti, while Alpa and Jalpa favour Bhakti. Parul on the other hand, will remain neutral".

"The disturbances and difference of opinions between the Jethanis and Bhakti will also affect the relationship of Mohan and Bhakti as the story unfolds", further informs our source.

Well, with a split between the Jethanis happening, the story is surely headed to an interesting phase!!