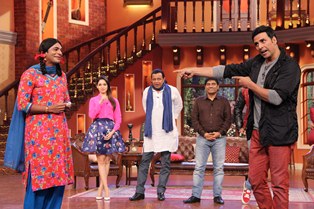 Guess who is back with a bang?! We are told that it was literally pandemonium on the sets of Colors popular show Comedy Nights with Kapil, as one of the show's most affable characters Gutthi (enacted by Sunil Grover) set foot on stage with her sister Palak (enacted by Kiku Sharma) amidst a thunderous applause and hoots. As Gutthi made an entry with a suitcase in her hand, she informed everybody that she has just returned from America.

With Gutthi's return, the excitement around the ever popular entertainment show Comedy Nights With Kapil has increased manifold. It's a double whammy, with double the fun and double the masti' as Gutthi and Palak create a laughter riot with their antics trying to woo the ultimate khiladi Akshay Kumar.

Coming to Comedy Nights With Kapil to promote his upcoming film It's Entertainment, Akshay Kumar outdid himself by providing the audience with a greater dose of entertainment. Engaging his co-star from the movie, Sonu Sood in a dare, Akshay made him show off his body to the audience. Sonu took the dare one step further and even threw his undone shirt at the audience. Furthermore, the Khiladi not only played a kabaddi match with Sonu Sood, but also gave a more than warm welcome to Gutthi by romancing her. Gutthi, in turn, used the art of ventriloquism to give a voiceover for the canine guests on the show - Zanjeer, the newest addition on the Comedy Nights With Kapil sets, and the dog from the movie. As a cherry on the cake for Bua, she found a groom in Mithun da who was more than willing to give her the respite she longs for!

Says our source who just couldn't contain his excitement, "It was as though Miss World stepped on to the stage. When Gutthi walked in, the audience was out of control! Their reaction was completely incredible - with applause, whistles, hoots and all. What's more the audience went ballistic when Gutthi sang her trademark song Phool Khile Hai Gulshan Gulshan... It was an atmosphere of pure celebration!"

"Everybody was extremely happy to have Gutthi back on the show. They say that you always find your way back to your true calling. We know Sunil Grover was always meant to be Gutthi - one of the strongest pillars of Comedy Nights With Kapil." adds another source.

Speaking about Gutthi's return to the show, Sunil Grover said, "Ever since I made an appearance on Comedy Nights With Kapil, people had been asking me when Gutthi would be making a comeback. It eventually made me feel that Gutthi had become my alter ego. When I entered the sets as Gutthi, the crowd went crazy applauding and shouting out Gutthi's name; and this went on for at least two whole minutes! It was an emotional moment for me and I found it difficult to switch back to my character but I eventually pulled myself together and let me humourous persona take over!"

Adding to this, Kiku Sharda aka Palak said, "Working with Sunil has always been a pleasure. Even before we worked together on Comedy Nights With Kapil as Palak and Gutthi, Sunil was and continues to remain a dear friend. He is a powerhouse of talent and I am now looking forward to some fun days with him."

Well, going by all the excitement that our sources exuded, we just can't wait to catch a glimpse of this most awaited comeback!

..Bebolove.. 9 years ago she looks like a witch in this pic LOL! xD xDDD

zoya-shah 9 years ago why do they call priyanka piggy chops?kill abhishek for that.it's an insult to her beautiful name and personality.i would prefer to call her pc.anyways !all the best pc for ur special appearance.

80seansweet 9 years ago "The information we are receiving is that there is a retreat from the city. This is a golden victory for the Somali people and we are committed to ensure that peace and order is restored to those areas," said government spokesman Abdirahman Omar Osman.

BIackSwan 9 years ago ooohhh i cant wait to watch piggy chops in ra one!!! srk & arjun were da only reasons for me to catch ra one and now my fav girl's dere too!!! yaaay!!!

tnx heaps shah for bringin pc for ra one!!!!

..Roopal.. 9 years ago NO...why my every most awaited movie is spoiling...first bodyguard with katrina's item number and now ra.one with priyanka's special appearance...i am very sad...