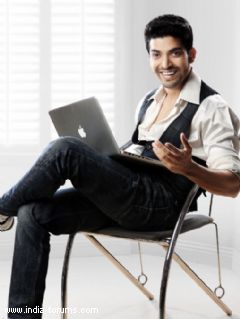 Gurmeet Choudhary is already hard pressed for time as he is shuttling between his daily soap on Zee TV and the dance reality show Jhalak Dikhhla Jaa 5 - Dancing with the stars! His problems were compounded further as he fell prey to Mumbai's dicey weather and was battling throat infection.

We hear from our source that Gurmeet was suffering from throat infection, cold, fever but he did not let that hamper his dance performance in the show. His performance was applauded by the judges.

We contacted Gurmeet who confirmed the news, "Yes I was unwell but I think I'm back with this performance. I was suffering from throat infection for the past few days and was feeling weak. We performed this week on a Kerala Dance form which needs lot of energy and we did a mind-blowing act."

SSKYHV 8 years ago u r the best ...superstar ...
proud to be ur fan
u blow my mind everytime
GOD bless u...gc

-nupur- 8 years ago Love you Gurmeet and Best of Luck with JDJ. Win it for us :)

crazyfangc 8 years ago Gurmeet...
I love you whole-heartedly..

the_chosen_one 8 years ago oh I just loved ur every performance in JDJ. keep rocking GC.

coolsirasri 8 years ago waiting for your performance this week...all the best

Alvi18 8 years ago read the spoiler about your 30...yipee happy for you