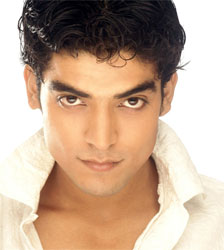 Featured Video
The guy had last year talked about the release of his football based Subhash Ghai film. But now it comes to knowledge that the project which had new faces besides him has been scrapped. When contacted, Gurmeet acted nonchalantly saying "I have forgotten about that project, as I had shot for it even before Ramayan had begun. Everything happens for the best. I have moved on since then, and will be looking for interesting projects once Ramayan ends".

He is also quite clear in his mind that he will not stick to only positive roles "I am an actor and will be open to doing all kinds of stuff. I agree that actors who were part of mythos earlier had an image issue, but over years the public has also grown up and now they have learnt to differentiate between actors and characters".

Asked to comment on the current track, Gurmeet says "Uttar Ramayan is as interesting as the first part. In a way this is a revelation as popular knowledge about this epic ends with slaying of Ravan". He laughingly talks about changes which people recommended so that he looks a more mature Lord Ram, given that he is quite a young guy. "I was asked to put on weight, but I said I don't need that as my acting is more then enough", states the actor.

Gurmeet also refused to speculate on his relationship with co star Debina Bonnerjee.  It was first alleged that the couple are married but now it appears that they are not wed but are a couple for sure. "Initially I would react to such reports, but now I don't even bother. We are good friends, nothing more nothing less", he avers.

But according to our source, there is definitely something cooking between this couple who have known each other since a long time. They had met on Sahara Mr and Mrs Bollywood and had even worked in Mayavi' a 3D Tamil TV project.

+ 6
11 years ago Gurmeet, you looked awesome in Uttar Kand, and def more mature and older than in the previous parts, especially when you compare your look to the one in Bal Kand, it is really different! In Uttar Kand you looked like a King and a father, and you were really great in the role too. It's always painful to watch though, because the story of Ram and Sita does not end on a happy note. :(

+ 5
13 years ago Aww My Mum totally Loves him, He is such an Great actor, I Like him on Ramayan

+ 3
13 years ago haiii my ram ji! i stopped watching ramayan long back cuz u are not there in it anymore! :( darshan do bhagwaan!! lol...

+ 2
13 years ago nthing more nthing less
nice quote i like!

+ 4
13 years ago all the best for all ur future projects
wanna see u in a rocking show sooon
i also wanna see u with my favorite actress ADITI (she is playing the role of yashoda in JAI SHRI KRISHNA) as i am a great fan of ADITI !!!
& also ADITI is the most ,dignified ,elegant & beautiful actress on television after actress divyanka tripathi
surely love to see gurmeet with these gorgeous &

+ 4
13 years ago wow !!! MR. MIRANI thanks for posting this article
soooooooooooooooooooo happy to read gurmeets article !!

thanks a bunch bunch for this awesome article !!!!
GURMEET surely super rocks !!!!