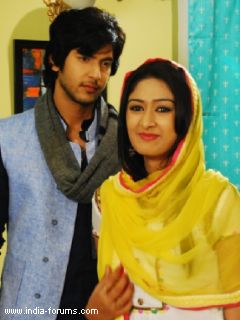 Beyond Dreams popular show Veera on Star Plus is all set to bring forth some drama in the upcoming episodes. Unknowingly, Gunjan will get trapped into casting couch which will lead towards some more drama.

Our source says, "There will be a shooting happening in the pind and as Gunjan (Farnaz Shetty) wants to become an actress, she will think of giving an audition but she will get trapped into casting couch and the person tries to misbehave with Gunjan. Ranvi (Shivin Narang) comes to Gunjan's rescue but the drama will start from there as the people of the pind will misunderstand that it's Ranvi who is misbehaving with Gunjan."

When contacted Shivin Narang aka Ranvi, he confirmed, "Seeing Gunjan in trouble, Ranvi comes to save her. A lot of drama is coming ahead in the upcoming episodes."

What will Ranvi do now? Will Gunjan confess the truth in front of all to take Ranvi out of this trouble? The upcoming episodes of Veera will unearth the answers behind these questions.

sarbari_mcn 5 years ago Farnaz Shetty, you are such a sweet heart.

+ 3
7 years ago Love RanJan..love u Farnaz Shetty and Shivin Narang!

7 years ago Farnaz your acting skill is super...
love you lot