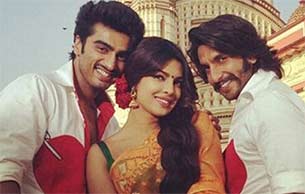 Director Ali Abbas Zafar's forthcoming project "Gunday" will be dubbed in Bengali for the audience in West Bengal.

Produced by Yash Raj Films (YRF), this is for the first time that their production venture will be dubbed in Bengali for fans.

The movie will be released in Bengali on the same day it releases in Hindi.

Shot extensively in Kolkata and other parts of Bengal, the film's backdrop essentially lends itself to releasing the film in Bengali.

"The film is set during Calcutta's (now Kolkata) most turbulent times of the 1970s and this is at the soul of the film with the characters seeped in the culture of that time.

"Consequently, the plan for releasing the film also in Bengali was finalised at the pre-production stage," said the movie's spokesperson.

"Gunday" stars Arjun Kapoor, Ranveer Singh and Priyanka Chopra in the lead role. It is slated to release Feb 14.

Breaking
Breaking Erica Fernandes confirms shooting for a music video with ...
47 minutes ago