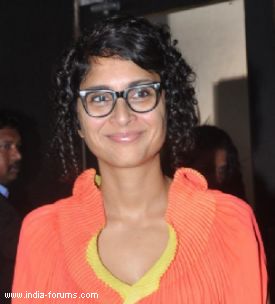 Filmmaker Kiran Rao has said she is supporting "Gulabi Gang", a documentary made on the life of Uttar Pradesh-based social activist Sampat Pal as it has inspired her.

"Gulabi Gang", made by Nishtha Jain, traces the life and struggle of Sampat Pal and her group Gulabi Gang that works towards the liberation of women in the state.

The acclaimed filmmaker who earlier had supported Anand Gandhi's film "The Ship of Theseus" held a special screening of "Gulabi Gang" at a suburban theatre here Thursday.

Meanwhile, "Gulaab Gang", a film loosely based on Sampat Pal's life is also coming up. Directed by Anubhav Sinha, it features Madhuri Dixit and Juhi Chawla in the lead roles.

Talking about "Gulaab Gang", Kiran said the film has only derived inspiration from Sampat Pal. However, "Gulabi Gang" is more real and original.

"It ('Gulabi Gang') is a documentry and follows the real life events. Sampat Pal herself is there in the film, she has dubbed for the film. She is supporting the film and has travelled the world over with the film," the filmmaker said.

"This is the real story of her real struggle, while 'Gulaab Gang' is a work of fiction and it is inspired from Sampat Pal's life," Kiran added.

'GOT' Couple Kit Harington & Rose Leslie Pregnant With First ...
an hour ago

Sanjay Choudhary Attacked By Goons; To File a Police ...
2 hours ago

NCB Clarifies They Are Not Investigating Karan Johar's 2019 ...
5 hours ago

Vishal Bhardwaj on How People are Trying To Malign Bollywood ...
7 hours ago

Sunny Deol To Make a Netflix Project With Son Karan Deol?
7 hours ago

Never thought I would be dancing, I was preparing to be an ...
12 hours ago