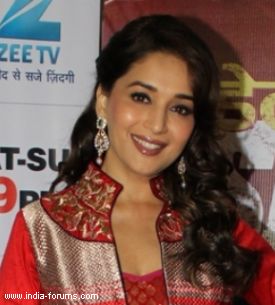 The trailer of Madhuri Dixit-starrer "Gulaab Gang" will be released with "Dedh Ishyiya", which is coming out Friday.

The actress will be seen after a gap of seven years in Abhishek Chaubey's "Dedh Ishqiya", which also features Huma Qureshi, Naseeruddin Shah and Arshad Warsi.

According to a statement, not only will Madhuri's fans get to see her in "Dedh Ishqiya", they will also get a glimpse of her performance in "Gulaab Gang".

Produced by Anubhav Sinha and presented and co-produced by Sahara Movie Studios and Bharat Shah, "Gulaab Gang" is directed by Soumik Sen and also stars Juhi Chawla in an important role.

Inspired by a group of women activists in the Bundelkhand region, "Gulaab Gang" is about women empowerment. It is slated to release March 7.