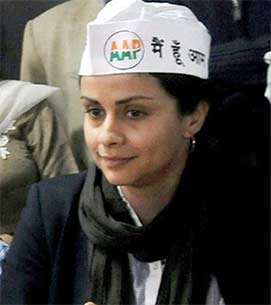 Gul Panag may be new to politics but the former Miss India has already proved she is no pushover in the election for Chandigarh's lone Lok Sabha seat.

When Gul -- as she is widely known -- entered politics as late as last month as the Aam Aadmi Party (AAP) candidate, she had to hit the ground running.

It was very much needed. Both her main opponents, from the BJP and the Congress, are older to her and more experienced, and they have the backing of the country's two biggest political partties.

The Bollywood actor says she wants people, especially the media, to take her role as a politician seriously.

"I don't want to be judged as an actor or a former Miss India. Look at my work and see what agenda I have for the future and then take a decision," Gul, 35, tells voters in Chandigarh.

She has been adhering to a 20-hour work schedule for the last over 20 days to establish herself politically in Chandigarh.

Gul is fighting it out against outgoing MP and former union railway minister Pawan Bansal and the BJP's Kirron Kher for the April 10 election here.

Bansal, a four-time MP, is facing three women candidates, including the Bahujan Samaj Party's Jannat Jahan, in this election.

He is also dogged by the taint of "railgate" in which his nephew was caught by the CBI with Rs.90 lakh of bribe money in a cash-for-job scam.

"Pawan Bansal has not done enough for Chandigarh in the last 15 years. If I am elected as MP, I intend to take up the fighting role as MP," Gul, daughter of retired Lt. Gen H.S. Panag, told IANS here.

"In Chandigarh, there are good policies but there is a lack of intent in implementing them... The system in Chandigarh is run by unelected people," she pointed out.

On her own agenda for Chandigarh, Gul has a lot to say.

"This city has a clear divide of the elite sectors and others. We need to bring them at par in terms of development. Every part of Chandigarh should have a harmonious, inclusive growth. The citizens here need to be heard. Chandigarh has the potential to be a world class city," Gul said.

Starting her day early with visits to residential colonies and villages to listen to problems faced by the have-nots, Gul walks for most part of her daily campaign trail.

She is accompanied by a small group of supporters and activists, mostly family members, friends and AAP volunteers.

Once Chandigarh votes April 10, Gul has her work cut out. She will be campaigning for AAP candidates in Punjab and a few other places.

On Return to TV, Ellen Addresses 'Toxic Workplace ...
19 minutes ago

Kaveri Priyam on Being Disappointed With 'Yeh Rishtey Hai ...
29 minutes ago