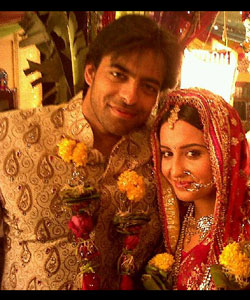 Yes, you heard it right!! Guddu Shukla will get a shock of his life in the episode today when his ailing mother who is admitted at the hospital will go into coma because of the Pandeys.

Our source states, "Vishnu Pandey and Rajju Pandey go to the hospital and reveal to Guddu's mother that his son is actually married now. The lady is not able to withstand the shock and immediately gets into coma. Guddu who gets to understand that the Pandeys have a hand in it hit both of them black and blue in the hospital. Guddu is stopped by his father who yet again prompts his son not to depend on the money of Pandeys to cure his mother".

A very worried Guddu later gets high on drink and asks his friends to get him a gun.

"In a drunken state, Guddu goes to the Pandey house and aims the gun at the Pandeys to begin with. But the moment he sees Runjhun, he understands that she is responsible for all the problems in his life. So he decides to kill her, and in a fit of rage shoots at Runjhun, much to the shock of the entire family", adds our source.

This, we hear will be the freeze point of today's episode.

Will Runjhun escape the bullet hit or not?

We also hear that the creative team is actually planning a track wherein they will expose to Guddu, the fact that Runjhun is a 'Bhagowaali'…

We tried calling Nivedita Tiwari, but she remained unavailable.

Get to see Guddu's yet another angry young man avatar in the Zee show..

..Surbhi.. 9 years ago i think that this might bring the two of them together..so hopefullly.. after their marriage, the show has become watching..so lets see what happens

-Nirvana- 9 years ago Yep I agree.....this incident will bring Rhunjhun and Guddu closer...Can't wait till they finally start liking each other and guddu will let go of all that hate and Rhunjhun will stop treating Guddu like dirt...

Nakuul Mehta and his powerful narration: Times when he hit ...
3 hours ago