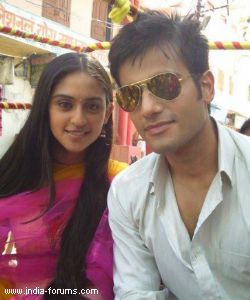 After the wedding celebrations of Jeevika(Krystle Dsouza) and Viren (Karan Tacker) in Cinevista's  Ek Hazaaron Mein Meri Behna Hain, we hear that the production house and channel are planning an outdoor shoot for the honeymoon sequence.

Jeevika and Viren will finally go to Goa for their honeymoon. We contacted Krystle who confirmed the news, "Yes, we are going for our honeymoon shoot in Goa. I am super duper excited to shoot there. I just came back from Goa after celebrating New Year's and now I have to go back for the shoot."

We called Karan who told us,"Goa is really close to my heart, it's my second home. When I wasn't acting, I used to go to Goa at least twice a year. It's going to be a tough shoot but it will also be fun."

Get ready to see some romantic moments between Viren and Jeevika in Goa.

6 years ago Love Virika honeymoon sequence in Goa..U both were looking so adorable..

6 years ago Loved Virika in Goa...
Love u Karan Tacker

8 years ago Love watching you and Karan onscreen and offscreen!!!

lovekt4life 9 years ago mr and mrs viren vadhera were superb!

+ 6
9 years ago Miss Viren and Jeevika proper screen space with a proper track! =(

9 years ago wow so far loving their hineymoon track...can't wait for the sbs scenes to air

9 years ago Viren and Jeevika love u!!! karan and krystle are amazing.

9 years ago KARAN TACKER AND KRYSTLE BEST JODI
PLEASE INDIA FORUMS GET A LONG INTERVIEW OF THESE TWO HOTTIES.