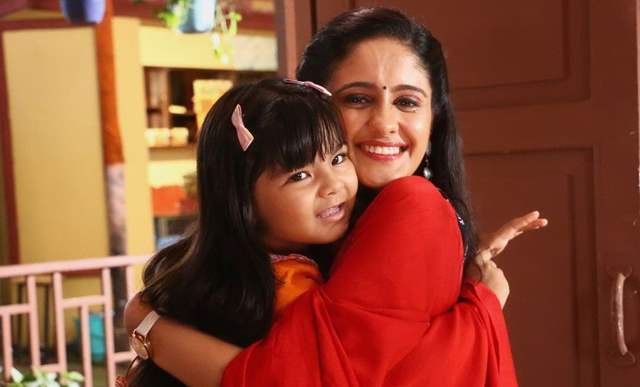 Star Plus show ‘Ghum Hai Kisikey Pyaar Meiin’ has always been a head-turner. The show manages to have people’s attention with the content shown in the show. The show recently took a leap of few years, post which Sai and Virat are separated. Virat is upbringing their son Vinayak while Sai gave birth to a baby girl Savi.

Usually, actresses often get skeptical playing a mother onscreen as it can lead to them getting typecast. India Forums got in touch with the gorgeous actress Ayesha Singh aka Sai and asked him if she had similar thoughts on accepting the major change in the show.

Ayesha quipped, “No, I wasn’t skeptical to play a mother at this age. I didn’t have any doubts or issues on playing the part because as an artist, one should believe in going wherever and however the story of the show is moving. I believe that whatever happens, it only makes the story better and one should go ahead with it. Two new fun elements in form of kids have been added which has made the story more intriguing and gripping, so the twist is only for the betterment of the show. Also, as an actor, I feel one should accept such things for the experience of it. You get to live a life and explore that side of your personality that you’re not”.

I feel, gone are the days where the actors are typecast into playing certain roles. There are so many mediums and so much of content being made that one can always opt to go and explore and then come back and do other things.

She added, “I feel, gone are the days where the actors are typecast into playing certain roles. There are so many mediums and so much of content being made that one can always opt to go and explore and then come back and do other things. There are so many examples of the same in the industry who’re doing the same brilliantly. I believe, I’m lucky to be a part of the industry when typecast is no more a concept. Lastly, I have a few nieces and nephews and I love playing and being around them and hence playing a mother wouldn’t be rocket science to me; I knew I can do it convincingly and hence had no doubts on playing a mother”.

Show some love for Ayesha Singh in the comment section below.

+ 4
3 months ago You are amazing with the kids and your approach is always natural.. God bless

+ 7
3 months ago this is such a Good thoguht process and Good for you ayesha for not shying away from playing a mother.. shows her dedication to her craftt hat she does want to explore and experiment..

+ 2
3 months ago There's a reason she's always trending among fans despite the cold shoulder given to her by mainstream media, she is completely down to earth, realistic and dedicated to continuously improving her craft! Hope she continues to shine and become more prominent in media! You don't always need a guy next to you to promote yourself :)

3 months ago Ayesha Singh is a fabulous actress.

3 months ago She is young. A smart actress would leave any serial at the right time like mrunal takut did. It has been a long time, she should have left the show and try a different one, otherwise you are going to get trapped in this saas bahu shit. Only artist who can take risk can have success.

+ 2
3 months ago Ayesha singh is slaying the role of a mother. Playing a mother on screen in a such a young age with so much dedication is commendable . We love her with both the kids - Vinayak and savi .Ayesha singh is an amazing and wonderful actress.

+ 5
3 months ago She's special for a reason ! There is only one Ayesha Singh 👌

+ 3
3 months ago Must say if you are doing you job full delicately you achieve every height. Acting is a profession you perform what is in your hands 🥰