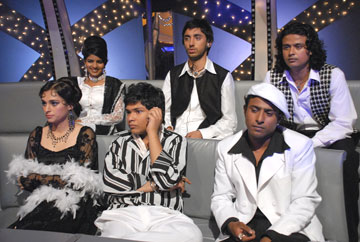 Come Friday 14th September, SRGMP sets will be going back to the Black & White era of Bollywood. The contestants would be singing songs from the Black and White bollywood movies. The show starts with one of the most popular song from that era “Bholi Surat Dil ke khote”. Aneek will sing the title song from Tumsa Nahi Dekha and dedicate the song to the unforgettable Maestro from Bollywood, O P Nayyar and the love for his life. Raja will perform on the song “Hum thhe who thhi, aur Shama Rangeen samajh gaye na” from the movie Chalti ka Naam Gaadi. Poonam chooses to sing the song “Mere Piya Gaye Rangoon” and it would be interesting to see Amanat joining her in the song to lend the male voice and both playing as husband and wife. Sumedha too makes sure to entertain the audience with the evergreen song from that era “Babuji dheeere chalna”. 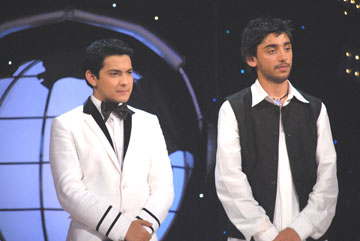 Friday is also the elimination day and now when the best contestants are left, it becomes sad to see them getting eliminated. Ismail Durbar is the happiest person this week as both the contestants from Yalgar Gharana take the top two positions with Amanat being at number one followed by Poonam. Raja, who was consistantly at the top last many weeks finds himself among the bottom two this week. Raja also appologizes to Himesh on the sets for unintentionally hurting him in the last episode. 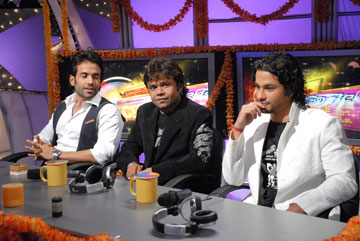 On Saturday, it is marriage song special and with this theme and the love story going around the sets, it's definitely going to be a fun filled episode. Kunal Khemu, Tushar Kapoor and Rajpal Yadav come as the special guest for the promotion of their movie - Dhol. They will bring out funny and lively atmosphere to the sets with their funny acts and comments. The episode commences with Raja making a comical entry on horse and singing the Punjabi number “Tenu Leke” from Salaam-e-Ishq. 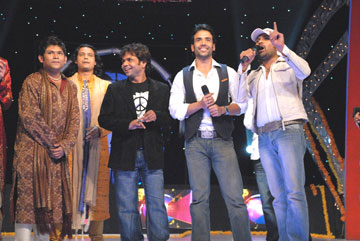 Aneek steals the show with his performance with the song “Mahi Ve” from Kal Ho Na Ho and is awarded full 30 points on the Gurugraph by all the mentors. Sumedha is not far behind and makes everyone tap their feet to “Bole Chudiyaan” from Kabhi khushi Kabhi Gham. Amanat performs “Sona Sona Dil Mera Sona” from Major Sahab which tickled Himesh to grab this opportunity to tease the unknown love of his life. 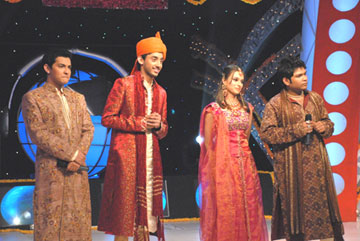 What better opportunity other than this marriage song theme episode to find some headway to the Trishanku Love Story!! So Himesh calls Sumedha, Aneek and Amannat on the stage and requests all of them to finally decide who wins the LOVE GAME.

To know who got eliminated, who are the ones to impress the audience, what do rest of the contestants sing and what is behind all the Love Game, do not forget to watch SaReGaMaPa on Friday and Saturday at 10 PM only on Zee TV.

14 years ago hr really neeeds to stoppp... he is getting sooo anoyyinggg

14 years ago I can hardly wait to watch these episodes. If I had the power, I would have made Sumedha the winner. Just look how pretty she looks. hehehehe

14 years ago ooooooo they all look pretty..

Amanat is already dulaha.
and HR save ur CRAP for someother time.

+ 4
14 years ago Himesh is an idiot. God why can't he just leave them 3 alone? I mean how would he like it if someone was making up rumors about his love life and saying he was in love w/ some other woman and cheating on his wife? Ughhh!!!

I cant wait until tomorrow! Poor Mussarat, bechara, he just had to go. And I am really eager to see the Saturday marraige special!!!!

14 years ago he was a good singer but not the best. I'm sick of himesh and his stupid love story topic. what's the poin of emberassing the singers they have some dignity and respect too.

14 years ago HR is embarassing the life out of the trio...give them a break.

thanks for the article :)

14 years ago i think musarat is out cuz he's not in the pix that r taken in indian clothes not black and white.