Gautami Kapoor traversed the tough road ahead in replacing Smriti Irani as Tulsi in Kyunki Saas Bhi Kabhi Bahu Thi, and 6 months down the lane, the actress feels glad that she has succeeded in this endavour. Telly Buzz spoke to the better half of Ram Kapoor on her above efforts. 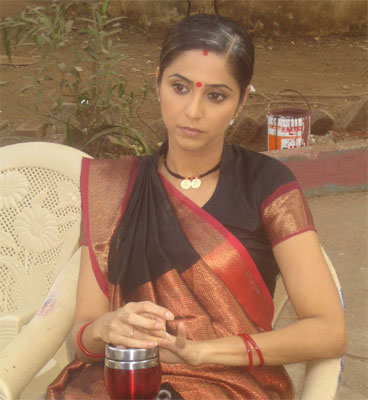 Featured Video
Kasauti Zindagi Kii is finally ending and given similar viewer fatigue with Kyunki Saas Bhi Kabhi Bahu Thii as well, do you think Ekta will soon take a call on your show too?

I am not the right person to answer this question. But as an actress, I would hope that Kyunki goes on for years like Bold and the Beautiful. As for viewer fatigue, this can happen, for our serial has run for the last 7 years. But every time, we have bounced back and am sure that we will succeed here as well.

Have you successfully erased the Smriti chapter, playing the role of Tulsi?

I never compare myself to Smriti . When I entered, I had made a deliberate attempt to be my self. Had I tried to be somebody else, it would have bombed big time. Honestly, when I was first approached by Balaji, I did not think it would be national news. But the way, you guys splashed it all over, I was surprised. But even then, I did not change my approach.

But your character is not as aggressive as Smriti's earlier avatar was. Your take on this?

Yes, but you have to understand the situation in which I entered. Tulsi was returning to her home, where she was unwanted. How can she be her old self?

As a modern woman, do you identify with Saas Bahu clashes?

It's a fallacy to say that urban women don't watch family drama's . My mum is an ardent Kyunki fan. Her schedule always gets upset due to this show. See, I agree the plots are far fetched, but who wants to see normal day to day routines? Viewers want escapism from their dull boring lives. Hence this exaggeration is needed.

As a talented actress, don't you wish to go beyond family show genre ?

Its not that I have not attempted different stuff. Ram and me worked in Dhadkan, which bombed badly. This SET hospital drama was the most realistic show, I have ever worked on. Similarly, Kehta Hai Dil began on a pragmatic note addressing contemporary social issues like a la "Picket Fences". The first 4 episodes were a big flop, but the moment the creatives added saas bahu track, the show went on to become that year's biggest hit.

Where is the story track of Kyunki headed now?

As you know, Tripti is dead and Mihir is in jail for murder. I believe he is being framed and I am out to find out the truth. This track is made interesting with the return of Suvarana Jha as Balwinder Kaur, a typical Punjabi kudi.

Is there a cross-over episode with Kahaani Ghar Ghar Ki planned?

Yes, it always fun to mix two different shows. But right now, all I can say is that Parvati will offer her help to the Viranis, and this will be shown in the fusion episode. Wait and watch to know more..

Being the mother of small girl, how do you juggle both work and baby?

Balaji has given me very flexible working hours. Besides, I have a great support system in my mom and mother-in-law. But yes, I do have separation pangs like every mother has.

shef01 14 years ago She mentions Bold and the Beautiful well If she has ever watched it she would realise what they pass as entertainment in KSBKBT does not even compare to the shadow of B&B which has been running for 20 odd years and still manages to keep the viewers glued.

14 years ago Hats off to gautami, she actually replaced smriti.

14 years ago they should wrap up ksbkbt, its had a good run

+ 5
14 years ago awesome..even though I stopped watching KSBKBT..I wish all the success to her and hope that everything works out for her

14 years ago wow.. thans for the article... she look sooo preety in the pictures !!!

+ 2
14 years ago Dhadkan boomed i liked that show it was kl her ram, achit kaur

friendsha2007 14 years ago kyunki should go on and on the serial has reache so far that its ending will be impossible.....kyunki saas longon ke dil mein bastey hai.... lekin smriti irani ko wapas lana hoga indian waley...... gautami is a good actress.... very talented.... but tulsi character does not suit her at all.... because her body language.... her guts etc is not like smiriti pliz ekta kapoor zid joro aur smriti ko wapas bulao kyunki us ke bina adhoura hai........ we are missing her .... hey you indians laug..... put pressure on ekta so that she may bring back smriti as tulsi