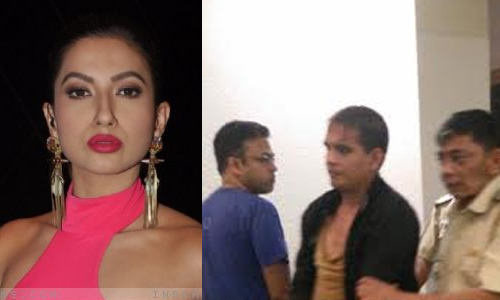 Beautiful actress Gauahar Khan currently seen as the anchor of India's Raw Star on Star Plus, was recently embroiled in a controversy as a sudden shocking incident occurred during the finale of the show.

Gauahar was slapped by an unknown man for her dressing style. The issue created quite a stir among the public and they handed over the culprit to the cops for his brash behavior.
Our reliable source informs us, "Gauahar was on the stage of India's Raw Star busy with her anchoring, an unknown man from audience known as Akil Malik appeared on the stage and misbehaved with Gauahar. He then slapped Gauahar which left everyone on the sets stunned. He stated the reason for slapping her was that she belongs to a Muslim religion but still was wearing such revealing clothes. Contestant Jeffery Iqbal tried to protect Gauahar and also hit the guy who slapped her. Immediately the police reached at the spot and arrested the accused."

We contacted Gauahar's spokesperson but he did not answer to our call.

+ 2
6 years ago that man slapped gauhar bcz she was wearing bad clothes according to him and reigion of Islam, that man himself should also be slapped bcz Islam does not allow any man to hit a woman like this.
what gauhar wears is considered bad in muslim society, but this is her choice and her job aswell, if we keep on salpping like this all muslims in india than salman, srk and aamir should also be slapped bcz they do all love making scenes onscreen and celebrate hindu festivals aswell.

6 years ago This was a horrible act and why are these people obsessed with women clothing. Girls dress better then boys. Men wore shorts centuries before girls.

+ 5
6 years ago Well I am not a fan of Gauhar's but from my point of view its Gauhar's wish what she wears and all. No guy has the right to raise his hand on her. And he just can't hit her in the name of religion. Islam or any other religion doesn't allow a man to raise hand on a woman. This guy is mentally sick -.-
He needs help. This guy needs to know his limits before pointing out someone else's fault.
PS: I don't know whether this article is true or not. But honestly, the ones who think she deserved it just put yourself in her situation and then answer. Would you like it if some random person slapped you in public?

Twins14 6 years ago Just a publicity stunt by a cheepo pretend celebrity!!! Even when she was in dance programme no one liked her or voted for her, always pretending to be hurt but trying her best at dance !!! How low can someone get for attention. Pretend is her name !!!!!

6 years ago I think that person did that for some other purpose...why these people dragging religion in between...if it is like that.then all the big stars of bollywood like shahrukh,salman and amir...3 khan's are muslim also...and there are many other muslim celebrities...
i think it's connected to her break up with kushal bcuz of religion.

6 years ago @available1, people like u are mentally ill. Get well soon nd grow up... Gauhar khan, I support you, dnt listen to loosers.

Galiyaan 6 years ago How cheap that Person is..Shame on those losers
Gauahar Khan be strong and fight for the right as u r a fighter

That man needs to go to hell and die

6 years ago she deservs this only..though i m sure a lady like her can go to any extand to get publicity..

6 years ago m nt a gauahar khan fan but as a girl it is her right to wear what she wants n how she expresses herself. no coward calling himself a "MAN" can come and slap her . it is because those mantality tht women are not safe. he can keep his hands and views to himself

6 years ago she deservs this only..though i m sure a lady like her can go to any extand to get publicity