And to give freshness to the story line post leap, there will be two new entries who will turn out to be important characters in the show. 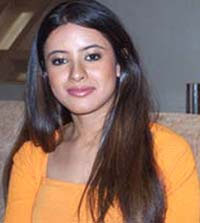 Featured Video
According to our source, "Garima Bhatnagar who was earlier seen in Kahaani Ghar Ghar Ki and Veeranwali will be making her comeback to television after her wedding. Along with her will be seen veteran actress Meenal Penese, who earlier played mother of Manpreet in Kis Desh".

We called up Vikas Goopta, Creative Director of Tuj Sang, who confirmed the news and said, "Garima enters the show as the parallel lead. However, her track is completely kept under wraps. All I can say is that her presence will eventually affect the lives of all others. Meenal Penese on the other hand is a negative character, and will make life difficult for Vrinda, who is married to Rajbeer. Their entries will be aired on Tuesday".

Garima Bhatnagar who is excited to be back with Balaji Telefilms says, "Today is my first day of shoot on Tuj Sang sets. I play the character of Babli, who is the younger sister of Rajbeer (Sandeep Baswana). She is a very positive character, bubbly in nature and is a working woman. Basically she runs away from marriage, and this is the only reason for her to stay away from home and seek a job. She believes that until she finds a right guy in her life, she will not give her heart to anyone".

On her look in the show, Garima states, "I have a very simple look and am seen in suits which have flairs. I have my hair open and look the typical working woman".

Garima got married on the April 17th to Dhruv who was last seen on Karam Apnaa Apnaa, and had been touring ever since with her husband. "After marriage, we went to various places including Manali, Paris etc.  After I got back, we got busy with the marriage of my devar. It's just been 15 days since I have settled down in Mumbai after marriage, and I am very lucky to have got work so soon", quips the actress.

According to our source, "The other new entry Meenal Penese will play the grand mother of Rajbeer and Babli".

13 years ago gosh, they are really trying all their efforts to make this show big. but all they need to understand, they only need to do one small thing for it to be a brilliant sucess. AND THATS TO UNITE YUG AND VRINDA !!!!! when will they learn

13 years ago she was Garima in Kahaani Ghar Ghar Kii, making life difficult for Adi and Maithili.

anubhav42 13 years ago Yug and Vrinda have to re unite, they were totaly made for each other. This show will totaly not be fun if Rajbeer and Vrinda unite. It used to be fun looking at Yug and Vrindas love.

+ 3
13 years ago not interested in dis show nemore cuz vrinda n yug aren't together... i knew dis would happen n its d same as hum dil de chuke sanam... not kewl... though it might get better after the leap but doesnt seem likely