The producer-director, Gajendrra Siingh who gave television the new trend of musical reality shows is looking out for yet another sea change now!! 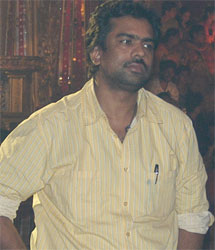 Featured Video
And the news is that Gaj ji is all set to blog! “I have interacted with so many genres of people, but never got a chance to get personal with the masses. I felt this is the right time to connect to my people and let them know more about me”, says Gajendrra who is also on course to direct his first film.

Is blogging just a stepping stone before he makes his debut in Bollywood as director? “Well, I will surely write about the new venture in my blog. But the main reason behind my blogging is to tell people about the intricacies involved in shooting and the day-to-day struggle we have behind the camera. Basically I want them to know the true picture of what it takes to make a successful show or a film”, he quips.

“Along side they should be aware of why a particular show is a hit or a flop. Everybody has a right to speak and I’m not doing anything new,” he adds.

The blog site of Gajendrra Siingh will be launched in a day or two.

Well, this indeed is a good strategy for promoting and marketing his upcoming film!!

14 years ago wow... everyone is blogging these days... thanks!

+ 2
14 years ago hmmmm...i don't think this the right time for him to start blogging but it's his call!

+ 4
14 years ago Its like commiting a suicide !!! So many Gajj haters all around, if he blogs, he will know what Masses think about him....and he better not know the opinion of Masses !!! He won't be able to digest it !!!

14 years ago I want to tell him that he should have given more importance to his First Star Voice of India who gave his life for this programme and judges on SVOI2 are too scared to even mention Ishmeet's name. He should have at least give some details of his investigations if he requested any.

+ 9
14 years ago Blogs has become common trend these days.