Malini Awasti, the popular contestant of NDTV Imagine’s Junoon Kuch Kar Dikhaane Ka planned a surprise on the occasion of the show director Gajendrra Siingh’s birthday. Malini, who represents the Mati Ke Lal gharana of Ila Arun impressed him with one of his favorite UP based folk song. 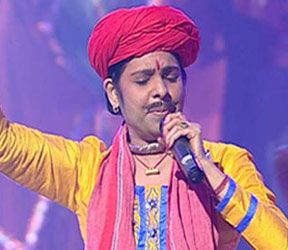 Featured Video
When asked about the song, she quips, “The folk song which I sang is called Dhobia which has its origin from Aasamgad. It is an old traditional folk song of the washer men. These people gather together to sing this song after their long hectic day of washing clothes. The song is very difficult as it’s a very fast number and sung usually by men and that is why I chose to dress like a man for this song”. When asked why she chose to sing this song, she replied, “This song has its origin from the place where Gajendrraji belongs and as it was his birthday, I chose to perform this song”.

A very jubilant Malini adds on, “Gajji was very happy to listen to the song. He said he had heard this song when he was 16 years old and after that he is hearing it today after so many years. He was very touched with this gesture”.

14 years ago fabulous film!!!! i just came back from watching it..i think that disrupting this movie..will make it a hit..so lage raho!!!!