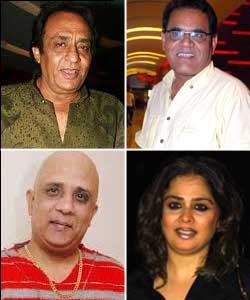 UTV productions is coming up with a new sitcom for SAB TV titled as Gaadi Bula Rahi Hai. As reported earlier about SAB TV showcasing short films during the weekends, UTV has been making their next for the same slot.

The latest we hear is that the channel has asked the production to make a Maha episode of Gaadi Bula Rahi Hai which will telecast on weekends and gauging the response to the show, the channel will shift it to weekdays.

Talking about the final locked cast, a source spills the beans, "Veteran actors like Ranjeet, Ameeta Nangia of Tara fame, Rajesh Puri who did a cameo in Star One's Rang Badalti Odhani and Mustaq Khan who was last seen in Adaalat are tipped to spice up the show."

We contacted Ameeta Nangia who confirmed, "It's very fun to work for the show as the concept is unique and I am essaying Ranjit's wife's character. I am really looking forward to the same."

Seems like this Gaadi will bring a lot known faces back to the journey of television...

all the very best to all