Naman Shaw and Jay Bhanushali have bonded like brothers. And why wouldn't they? After all they have been seeing a lot of each other, what with doing two reality shows back to back. The duo, after being seen in Bollywood Ka Ticket, are currently in Tyohaar Dhamaaka on 9X, a festival blast showcasing various dance forms, festivals and cultures of our country. 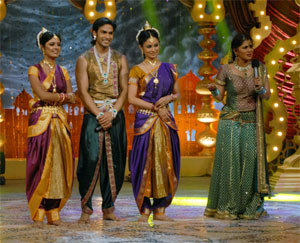 Featured Video
Naman showed the true spirit of brotherhood when it came to giving marks to Jay's team. Naman, being indebted to Jay for supporting him in the earlier show, decided to give Jay's team a high score of 9 on 10. However, Mouni Roy(who is Naman's team partner) was not quite pleased with this decision of his, which led to an altercation between the two. Mouni was so miffed that she walked off the stage in tears.  After hours of cajoling, Mouni returned back only to fight again with Shayantani, who by now supported Naman's decision.  As a result of the argument, Mouni refused to be a part of the show.

And no matter how much everyone tried reasoning out with her, she did not utter a word to Naman and the silent war between Naman and Mouni continues even today.

We tried asking Jay Bhanushali more on the incident, but he remained tight-lipped and said, "Nowadays, whatever I say is mistaken by one and all. So I will prefer not to comment on this. I don't want to get into unnecessary controversies now".

Naman and Mouni were unavailable for comments.

Well, the irony here is that Naman's team has been the best performing team in the competition so far!! So guess keeping your trap shut is not such a bad thing after all!!!

14 years ago y did mouni walk off just coz naman gave a high score.......how childish.....come on itz not the end of the world Jay and naman r such sweet freindz awwwwww

+ 2
14 years ago Rality shw widout any controvery. no way... dis is another twist in d shw

+ 2
14 years ago k,now i am half minded i love mouni and naman also jay,so i cant say anything

14 years ago lol.. feel sorri forjay.. i sort of agree.. people r going abit ott in watever jay says, and he doesnt derserve it, abt mouni n naman am not guna say anithing cuz am not sucha a big fan of them n dnt know much abt them, but i guess mouni did go ott over the score, cummon, it's onli scores it's not like she's gunna die if she gives 9/10.. jeez.. aniwai, thx for sharing..

+ 2
14 years ago It really is rare to find such friendship!!!!
May their friendship remain like this forever!!!
Naman is really sweet!!!

I guess now with Jay's team out Mouni should make up with her team members!!!!