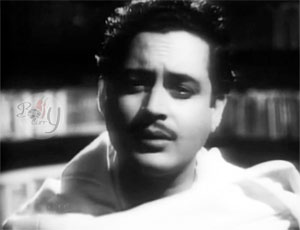 after, his family moved from town to town; he first lived in Madras, then Ahmedabad, and then Calcutta before shifting permanently to Bombay.
At the age of fifteen, during his stay in Bengal,  he began to cultivate a passion for dance and did all he could to break into the world of cinema as a choreographer.  He then tried his luck as an assistant director and actor in supporting roles. He worked with the Prabhat Film Company where he met superstar Dev Anand.  With Dev Saab, he established an immediate friendship and mutual trust that opened the doors for his first cinematic venture. Dev Anand, who was already well-established as an audience favorite, took charge of launching his friend and even agreed to be the protagonist of his debut behind the camera with the film Baazi (1951). This was followed in quick succession by Jaal (1952).
Having tasted instant success, Guru Dutt had enough funds to open his own production company. He then married Geeta Roy, the famous playback singer whose voice was the highlight of several of his film's soundtracks. In 1953, he also wanted to take a chance at playing the protagonist in his films, so he took to acting. He made an impact in front of the camera with films like Baaz, Aar Paar, and especially in the romantic Mr. & Mrs. 55 - a bona fide hit which earned both audience and critical appreciation.
The ingredients that set Dutt apart included his exquisite narrative technique, rich visual quality, careful choice of soundtrack, and the elements of mystery, philosophy, and ambiguity in his characters. These qualities placed Guru Dutt's name alongside the likes of Raj Kapoor, Bimal Roy and Mehboob Khan as the torchbearers of the golden age of Indian cinema.
He discovered new talents such as Johnny Walker, an gifted actor who effortlessly added a touch of comedy in the most dramatic and poignant movies, the director and writer Abrar Alvi, and the elegant beauty Waheeda Rehman with whom the media assumed a romantic link with him for years.
Following his rapid ascent, he produced Pyaasa in 1957. It was hailed as an absolute masterpiece and is still regarded as one of the best films to have ever come out of the Indian subcontinent. The film featured a remarkable performance by Waheeda Rehman, along with Mala Sinha in a proud and haughty character that served as a challenge which she met and conquered with her talent.
His next venture, Kaagaz Ke Phool, was another stroke of genius, though it was not regarded as such at the time of its release. Full of autobiographical references, it was conceived as a glimpse behind the scenes of the Indian film industry, and it recounted his thwarted love affair on and off screen with actress Waheeda Rehman. Though a brilliant film in every respect, it was perhaps ahead of its times; Kaagaz Ke Phool failed to connect with viewers and turned out to be the most painful and unexpected failure of Dutt's career. Let alone his career, the man's life itself did not remain the same after this tale that he poured his heart and soul into was met with such indifference. Demoralized and wounded, he began to retreat from the limelight and resolved to no longer work as a director.
Away from the camera, Guru Dutt continued to act only in films made by others, even though some have suggested that behind the work of his collaborator Abrar Alvi (including Sahib Bibi Aur Ghulam) was actually the hand of his influential mentor, Dutt.
An unfortunate victim of alcohol, who was also given to unregulated use of psychotropic drugs, Guru Dutt committed suicide in 1964. At the time, he was scheduled to meet with Mr Raj Kapoor and actress Mala Sinha to discuss the film Phir Bhi Bahren Aayengi, in which he was to act as the protagonist and also the producer.
Curiosity Corner:
*After his death, the role in Phir Bhi Bahren Aayengi went to a young but enterprising Dharmendra.
*Asha Bhosle has been the last person with whom Guru Dutt spoke to before dying.
*He is regarded as Indian's Orson Welles.
Though he did not live long enough to register an impact through quantity, the quality of his work both in front of and behind the camera is such that his place in the history of Indian cinema will never be forgotten.