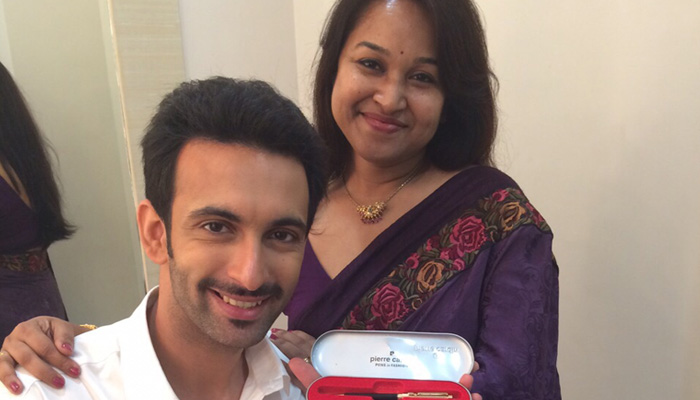 Our television actors sure do have a crazy fan following & few of them like to return the favor too. Our sources inform us that Nandish who is currently participating  his wife, Rashami Desai, in a dance reality show Nach Baliye 7 specially flew down his fan Monika Kashyap who is a school teacher & has been following the couple ever since Uttaran days.
The 40 year old something fan met the couple during their city promotion of Uttaran & has been in touch with them since then. Before Nandish - Rashami entered the Nach house, Monika had expressed her wish to watch their performance in person; Nandish immediately had made arrangements to fly her down to Mumbai & had a chat with her before his performance on the sets. Monika was had her fan moment & also read out messages from their other fans based in Malaysia & Siberia.'
Nandish was in awe when his fans back in Orissa had sent them a Silver Ganesha & happily posed for a picture with his fan,' confirms the source.
Like fan like actor.

5 years ago Nandish Rashami r best..very nice simple n down to earth.love them

5 years ago So happy n proud of Nandish n Monica Di..love u both.
Nandish n Rashami r the best couple

8 years ago woo Both r my fav's anu is very pretty , john i lov him :D

8 years ago John has a bikini body...it should be beach body IF correct it...:)

8 years ago JOHN has a perfect body nut Anushka isnt deserving -.- bips bebo or even priyanka have nice figure

8 years ago This article is about "best bikini body in India", So where are the bikini pics???

8 years ago agree
john and Anushka have nice body

+ 8
8 years ago Looove you Hrithik Roshan!For me, you have the bestest body!!