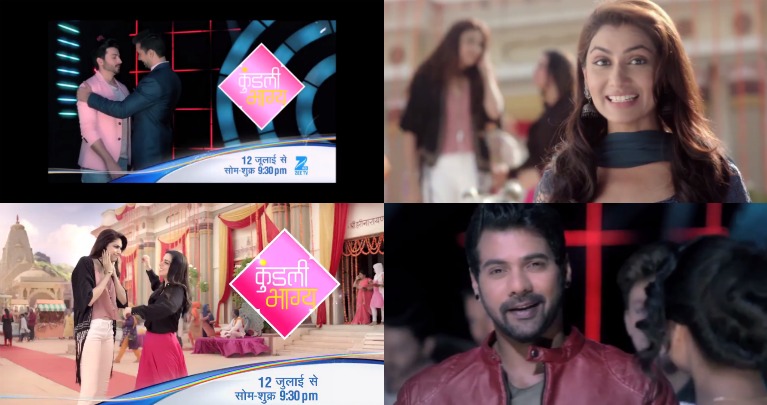 Kumkum Bhagya's spin-off, Kundali Bhagya is all set to hit the TV screens on July 12. And before the show goes on air, we have a glimpse of the to be lead pairs in the show. From what it looks like, we are sure it'd turn out to be an interesting watch.
As reported, the show will revolve around the lives of the two estranged sisters of Pragya (Sriti Jha) and Bulbul - Srishti (Anjum Fakih) and Preeta (Shraddha Arya). It will also have Dheeraj Dhoopar and Manit Joura playing their love interests, Karan and Rishabh respectively.
Take a look at the promos here:
As we can see, Karan will be jealous of Abhi (Shabbir Ahluwalia), as both will belong to the same talent company and given that the latter is a senior, he will be given more importance. This will not go down well with Karan and his own brother, Rishabh will try to calm him down.
Srishti and Preeta will also be seen in contrast to each other. While the former will be carefree, the latter will be a responsible one.
How the lives of all of these people will come together and how the story unfolds is what the story will be all about.

LawlessLawyer 3 years ago I am still trying to figure out what on earth Kundali Bhagya means.
This one is not a spinoff.Basically this is a remake of KKB while the original one is still on air.Double dose of nonsense is on its way.

simran_singh_24 3 years ago I thought the rumours about this show were a joke.
Zee is aping SP where Ishq baz gave birth to another circus.

akshi. 3 years ago Interesting lolll ...
There is no difference between kkb &kdb exactly same shraddha is another pragya & anju as another bb . Even the hero's are somewhat same only . This is not going to work , original kkb is only working without a story now there is another kdb which is working on kkb story . EK has definitely lost it .

Alpha_Ka_Gamma 3 years ago Eww Such a tacky title...Kundali Bhagya ??? Yuck. This show will wrap up within 4-5 months

Just spare Shabir from this torture .

fatssrilanka 3 years ago This is utter rubbish. God save us from this torture called Kundali bhagya.

BreezyBoo 3 years ago Absolutely! Shit giving rise to another level of shit! Amazing well done Ekta and her pigs! They thought enough of torture from Tanu's ultimate pregnancy track and never ending nonsense from Aliya, Nikhil all idiots shitting around let's take the torture to NEXT LEVEL! Kundali Bhagya wow! Just kill this show already, nobody is interested. Wish the actors knew what they are upto. Hufff. SPARE US EKTA KAPOOR.