Nach Baliye 4, started with a bang and after two successful weeks, its time for the first elimination on the show. The verdict is out and first jodi to be eliminated from the show is Jodi No. 10, Jatin Shah and Priya Bhatija from Balle Balle group. 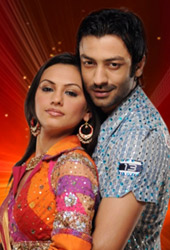 Featured Video
The Jodi from Shaava Shaava team in bottom two along with Jatin-Priya was Karnvir Bohra and Teejay Sidhu.


The theme for this weekend episode was Contrast. Jodi No. 10 performed on the song 'Dil main baji guitar.“Elimination of Jatin and Priya was expected and even the duo took their elimination very sportingly. It seems they were aware that its time for them to bid adieu,” says our source.

Jatin-Priya had been at the receiving end by judges since the show started. “In the last episode, they even forgot some steps which got them in the bad books of judges as well as audience. Though judges gave them a chance to prove their self, they were not successful in that,” adds the khabroo.

The new format introduced in Nach Baliye 4, Nach For Life on Saturday will see 3 jodis each from the Shaava Shaava and Balle Balle teams performing. The Balle Balle jodis who performed includes Jaspal Bhatti and Savita Bhatti,  Sudeep Sahir and Anantika, Vineet and Tanushree. For Shaava Shaava, Naman Shaw and Megha Gupta, Teejay Sidhu and Karnvir Bohra, Abhijeet Sawant and Shilpa performed, where the Shaava Shaava team faired better, thus resulting in the ouster of Balle Balle's lowest scoring Jodi, Jatin Shah and Priya who failed to impress the junta too.

For more on Nach ki jung, keep watching this space. Lets wait and watch to know who will be the next to get out!

14 years ago glad they were outsed....because karnvir & Teejay is a FAR better dancer than Priya (she sucks)....although i must say Jatin does pretty good!!!1

14 years ago nobody''s forcing them to dance...get a life you''re famous and rich already do acting..its the best you both can do...

14 years ago they were ok. They did not do well. good luck to them.

+ 5
14 years ago they were week anyway!!but good that they took thier elimination in the right spirit!!

+ 6
14 years ago noooooooooooooooooooooooo................
priya-jatin were one of my fav jodi's... they shudnt have been eliminated... but, i hope they will atleast come back with a gr8 bang in the wildcard round entry or smth...