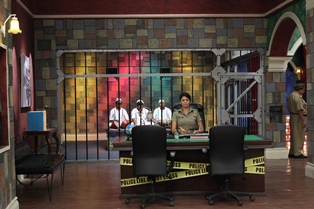 SAB TV's most loved TV series F.I.R will don a new avatar this weekend. The show is all set to send its audience on a laughter riot with an innovative look and hilarious engaging sequences. The iconic Imaan Police Chowki will now be on-stage with live audience. The set audience will also be involved solving crime cases, as the cast will ask for their opinion and participation.

As part of the chowki, a group of prisoners in jail will be seen posing as musicians offering a melodious situational symphony to viewers as well.   F.I.R's stage avatar is all set to enthrall audiences with some thrilling action-packed performances, dynamic stunts raising the comedy quotient of the show. The audience will continue to see their much loved characters - Chandramukhi Chautala, Bajrang Pandey, Gopi (Gopi Bhalla) and Billu as they indulge in amazing antics in their sincere attempts at cracking mysterious cases.

Mr. Anooj Kapoor - Sr. EVP & Business Head SAB TV, said, "F.I.R has done brilliantly as a police comedy show, we have always created shows which have lovable characters that are etched in the minds of our viewers. Chandramukhi Chautala, Bajrang Pandey (Amir Ali), Gopi and Billu are characters which have received great admiration and love from the audiences. The new format which involves live audience will showcase a complete new and fresh dimension of the show; it will be high on engagement, action and entertainment."

Kavita Kaushik aka Chandramukhi Chautala said, "It's a wonderful feeling to act in front of a live audience. F.I.R. has always got a lot of love and affection from its fans & I am sure format change of the show will appeal to the existing audience as well as attract more viewers. All of us actors are truly happy with these progressive changes in the show and are eagerly waiting to connect with a live audience on the sets. "

Watch Chandramukhi Chautala and her elite team entertain the audience on a whole new level.

kunalkapoorfan 9 years ago He is sooo handsome, I love his long sexy hair, but even with shorter hair he is sexy!!!! I started a fan club for him with wall papers and lots of pictures on face book, called Kunal Kapoor Fan Page. Lots to talk about and updates on movies and other stuff. Love to meet and talk to other Kunal fans.

harddisk01 9 years ago he is a vary good actor.i want to be a actor.please help me...

pyar-ishk 9 years ago OMG I just love him. Kunal is not just hot but also a excellent actor.

Payal25 9 years ago awhh his haircut really looks good on him!

sumonetolub 9 years ago i love kunal!...its been so long since hes been in movies and i love the haircut...both suit him :)

Nikhi. 9 years ago I loved his hair! But he does look good with short hair too!

sdbigfan 9 years ago cute as usual, hot as alwayz , smexy comes as nothing new , all in all i love d new kunal kapoor ;)

*~*Kamala*~* 9 years ago It's so sad he didn't get to popular and better movie offers. I think he is capable of it. He is a total cutie also!!!:) THe hair suits him:D