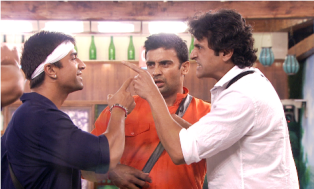 Every week, Bigg Boss is fueled with fights and disputes and this week seems to be no different. The luxury budget task, Bigg Boss Ki Toy Factory will bring to the forefront major differences that exist amongst the Bigg Boss contestants. While on the one hand is Armaan's team comprising of Tanisha Mukherjee, Sangram Singh and VJ Andy who give their best shot in order to meet the targets which have been set by Bigg Boss, on the other hand is Sofia's team which includes Kamya Punjabi, Kushal Tandon and Ajaz Khan suffer setbacks owing to some lazy team members.

After Bigg Boss announces the first production order of 50 soft toys to both teams, it results in a series of conflicts that hamper their overall productivity.

The first fight erupts between Kushal and Sofia Hayat when Kushal doubts Sofia's proficiency at leading the team thereby making Kushal step back from contributing towards the task. Later in the day, Armaan and Kushal have an argument over the quality of soft toys that Sofia's team has been producing. Another issue arises when Gauahar and Andy have a disagreement about the overall quality of work being put forth by Armaan Kohli and Andy's team.

Things further get ugly when both the teams fail to meet their preliminary targets within the given frame which leads to further friction between them. Ajaz and Armaan resort to snatching raw materials from each other's grasps to meet their production line requirements. Gauhar Khan catches sight of Ajaz and Armaan's brash attitude and intervenes immediately. However, the arguments and spats continue all through the night as the task gets more intense and targets get tougher.

Will the housemates will able to make peace and accomplish the task or suffer a major setback in the luxury budget this week?

7 years ago Kushal tandon u r supercool...njoy and hav fun...

10 years ago its just a kiss! they hav it in american movies all the time!! and yeah it may be a lil uncomfortable with parents but who cares one day all movies will hav kissing scenes!

but i thought that anushka and shahid had a funni scene but lafange pariyde was so innocent and cute :)

+ 4
10 years ago why do they even have to have any lip-locks in bolly movies?? i mean it's so embarrassing to watch it with parents or siblings..!!

+ 2
10 years ago Kissing scene does not matter as long as it's actually apart of the scene and is not done to show vulgar.

+ 2
10 years ago I hate all these liplocks in Bollywood movies. Like seriously eww !

+ 4
10 years ago Most of these movies were FLOP anyways. It is so sick seeing kissing in bollywood. What happened to morals and culture. Disgusting.

+ 3
10 years ago ranbir and priyanka for sure but hw can u lot say its not needed i am sorry but in a movie i u r goin out with sum1 obviously u gonna hav aphysical relationships and wats rong with it and it just a kiss to show love and passion and care course its needed dnt tell me u nt gonna kiss yr bf once while u goin out its nt as if u will get pregnant peeps looool wats rong with kissing dnt nw y india makes it sucha big thing i mean on star news the headline is like deepika and imran kiss under table OMG loool so wat u got no better news. get over it and i think rabir priyanka kiss was cute and passionate bless them