View Profile
Swades Foundation, founded by Ronnie and Zarina Screwvala, recently held a fundraiser and the night was attended by the glitterati of Bollywood. Along with the Bachchan family, who were the guests of honor, the night witnessed an array of Tinsel Town celebs who sizzled the red carpet. With one spectacular appearance after another, the Fashion Police was diligently at work to bring to you some of the stunning appearances the night held.
Sussanne K Roshan 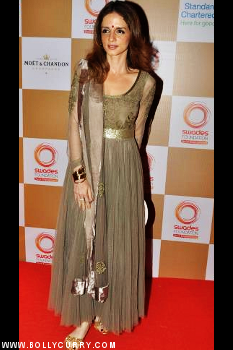 It's been quite a while since we last spotted the flawless Sussanne Khan. Donning an ash-brown anarkali suit with golden accessories, unfortunately Khan wasn't looking her best. The suit looked slightly morbid on the damsel and we would have preferred a pair of heels instead of the golden flats she opted for. Tanned make-up, loose hair and a bindi adorning the forehead completed her look. Overall, this appearance lacked the luster we're accustomed to seeing from the petite beauty. BollyCurry Rating: 2.5/5
Shilpa Shetty 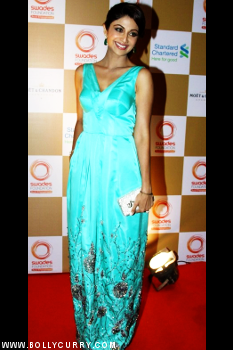 The gorgeous lady decided for a modified version of a Rajat Tangri teal gown and accompanied it with a monogrammed Leiber clutch. While we loved the original gown, this modified version with an off-center weave pattern wasn't appealing much to the eyes. The dress was clumsy at the torso, drawing way too much unwanted attention to the bust, thus stealing the show from the intricately beaded skirt. Hair done in a classy up-do and natural makeup came to the rescue for Shetty. BollyCurry Rating: 3/5
Shweta Nanda 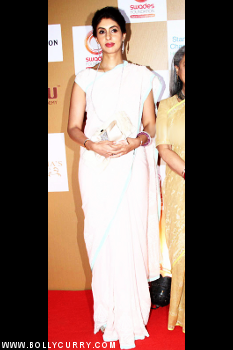 The daughter of Amitabh Bachchan dressed appropriately for the guest of honor position she was bestowed with in this pale-hued Abu Sandeep saree with white embroidery. The sparkling diamonds dangling down her neck and ears made the look impeccable along with her hair tied up in a loose bun. We're not too sure of the beige silk clutch but other than that a job well done, we say.BollyCurry Rating: 4/5
Vidya Balan 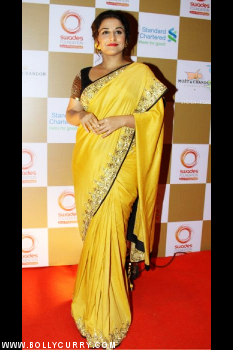 Our Oh la la girl stepped out in a Vikram Phadnis saree. Ditching your all-time favorite helps at times, doesn't it? It surely did in Balan's case. Looking awesome in this mustard colored sareewith a dash of black and gold, the award winning actress managed to effortlessly grab some eyeballs. And how can we miss that dazzling smile? BollyCurry Rating: 3.5/5
Sonakshi Sinha 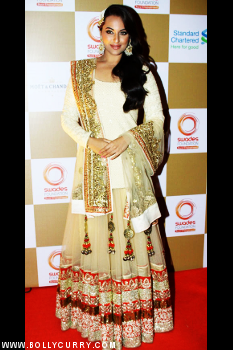 Sinha too walked the ramp in a Vikram Phadnis creation. And how spectacular she looked in this heavily embroidered lehenga and dupatta, paired with a plain white top to give the look some balance and the dash of red breaking the monotony. Accessorized with traditionaljhumkas and a pasa over her head, it gave an interesting addition to the look. We also love those luscious black locks pulled over her shoulder. BollyCurry Rating: 4/5
Mehr Jesia 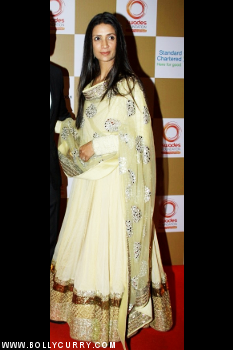 Former model and now star wife, Mehr attended the night alongside her husband Arjun Rampal in a Vikram Phadnis anarkali suit. Gold seems to have been a favorite of most for the night and Mehr was no exception. But alas, she failed to impress in this voluminous and heavy ensemble. We suggest that had she draped the dupatta slightly different than round her torso and may be a little experimentation with the hair would have done some good. But for now the look fell fairly flat. BollyCurry Rating: 2.5/5
The fundraiser was attended by many prominent figures from Bollywood with the Bachchans, Dia Mirza, Neha Dhupia and Kunal Kapoor to name a few. The night also saw some interesting appearances. Tell us about your reviews of those presented. Which made your head turn and which made your eyes burn?
Writer: Urooj K.
Editor(s): Nabila S. and Jenifer Y.
Graphics: Marsh P.
Do you have a suggestion or comment for BollyCurry? Drop us a PM at  BC_Dropbox today.

Love is in the air for Sussanne Khan and Arslan Goni; Duo has become ...