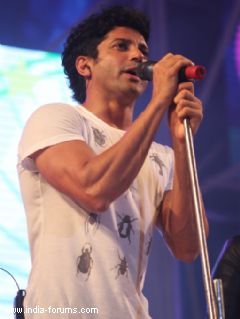 Farhan Akhtar has added more songs to his repertoire. Farhan has added Pink Fyold and songs from his directorial film Lakshya. Farhan usually performs on songs from Rock On, Bhaag Milkha Bhaag.
Farhan Akhtar has been extensively travelling across India performing at various colleges. Farhan Live band is gaining popularity among the college goers.

Farhan is trying to make time for as many possible. He has been travelling a lot of places around the country for his performances. He had performed extensively. In the last month itself Farhan has performed Dubai, Calcutta and even IIT Roorke, Uttarkhand.

Going forward he has an interesting lineup of events across cities.