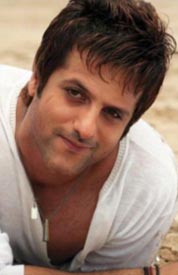 Fardeen Khan has taken the title of his forthcoming romantic comedy, Life Partner, quite seriously.


While the Abbas-Mustan/Studio 18 co-production releases worldwide next week, Fardeen airdashed to London last week to spend time with his real life partner, Natasha, and enjoy a quiet holiday with her.


Remarked a source, "Fardeen hadn't seen his wife for over two and a half months as he has been shooting non-stop in Goa for Ajay Devgan's home production. He has been missing her. Also, the unfortunate demise of his father has deeply affected him. He needed to escape from Mumbai and unwind."


Natasha Madhvani is the daughter of London-based businessman Mayur and yesteryear's actress Mumtaz. Natasha and Fardeen have been friends since childhood.


The couple will return to Mumbai in the week of release of Life Partner.
Featured Video

BB 15: Nominated contestants get a chance to save themselves; ...

I don’t mind falling sick every day, if I can find doctors like ...

People should also stop doing surgeries, and then talk about ...