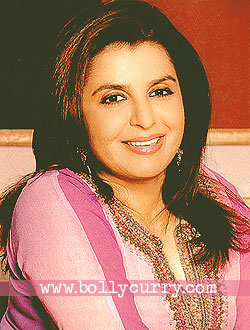 Maintaining her tradition of featuring the cast and crew of her films in the end of movie credits, Farah Khan will be doing the same for Akki-Kat's Tees Maar Khan.

With, an added bonus... Apparently, her triplets Czar, Diva and Anya will make their filmy debut alongside mommy Farah! Aww!

In the credits, Anya and Diva will be wearing dresses, while Czar will be filmed in a baby tux. The two-year-old babies were reportedly showing great enthusiasm on sets the day of shooting, yet like all kids, boredom came in very, very soon! Farah said that the kids walked out as soon as they were jaded, led by little Diva!

Nonetheless, Farah was delighted to have them on the set and in the credits. She had a temporary nursery built during the Malshej Ghat portion of the shoot to spend more time with her babies, and this led to them being familiar with everyone on the team, from leads Akshay Kumar and Katrina Kaif to even the spot boys!

We are excited to see Farah's little angels on screen for the first time! Is this the start of many more on-screen appearances? Only time will tell!