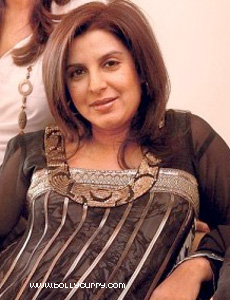 challenge: to completely choreograph three songs for the upcoming film Joker - in the next 15 days!
However, the challenge does not stop there. Things have been made a little more complicated for the choreographer-turned-director as all three songs have to be completed together, leaving the multi-talented woman with no time for a break as all actors are required for the shoots. With the completion of the film drawing near, all the actors are on set, making it easier for all those involved to finish their task within the next fortnight.
So who set Farah the challenge? It is said that husband Shirish Kumar wanted no one else but wife to choreograph the moves for the film, and thus, have had Farah make an exception when accepting the offer.
But the task has not come easy. Being the busy woman she is, Farah is having to strenuously juggle her personal and professional lives to spare some time for the film. A rough new schedule commences as per hence: spending a good part of the day with their triplets and the evenings shooting for the film, sometimes venturing late into the night.
However, Farah is not the only one to make some sacrifices. Due to Farah's circumstances, lead actor Akshay Kumar has also made an exception and has agreed to shoot late into the night.
We wish Farah all the luck in her professional endeavors in this project.