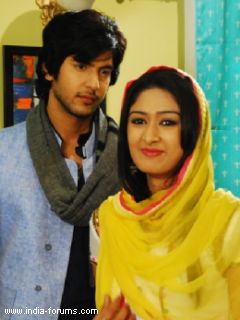 So far there's nothing going well between Ranvi and Gunjan in Beyond Dreams' popular show Veera on Star Plus but it seems now no more. It seems that all will be well soon between the two as the couple will soon be going for a mini honeymoon.

As seen in the show Gunjan has now realized that Ranvi is geniunely a good person and is guilty of her rude beahavior towards her. As Ranvi manages to save her jewelry, he gets furious at Gunjan for selling the jewelry. As the differences are growing between the couple, Gunjan is trying her best to pacify things between them, she has started caring for Ranvi. The couple who has not yet got a chance to spend time together peacefully since their marriage will go for an outing. They will go to seek blessings at a temple which is away from their pind.

Talking about the upcoming track of the show, our source informed us, "The family members have planned to send Ranvi (Shivin Narang) and Gunjan (Farnaz Shetty) for a honeymoon. Ranvi is totally unaware about it and he thinks that they have to visit a temple because Chaiji (Shagufta Ali) couldn't go there and she is also sending Gunjan along with him. It's all been planned by the family members to send Ranvi and Gunjan for a small honeymoon as they can spend time together. So the temple visit will turn into a mini honeymoon for the couple."

When contacted Shivin Narang aka Ranvi to know about the sequence, he said, "Yes it's going to happen soon but as per Ranvi it's not a holiday but it's going to be exciting and fun."

LadyMacbeth 6 years ago Love you Shivin Narang and Farnaz Shetty. You guys just rockk together as Gunjan and Ranvi .

DOTS. 6 years ago love u Shivin narang..
Farnaz Shetty you are doing a great job!

vckavs 6 years ago lovin u shivin narang & farnaz shetty day by day. u r so talented actors.waitin eagerly for this track!!!!

LadyMacbeth 6 years ago Shivin Narang & Farnaz Shetty , you two are doing a fantastic job in Veera .

ParAnJas 6 years ago Shivin You are doing great as Ranvi... Fab. actor you are ... keep Up the Good work and U are the reason I m watching This show... keep Smiling and Keep rocking cheetah...
Shivin Narang the Best

krupaa 6 years ago Shivin Narang keep up the good work.
I am watching this show just for you.
Stay happy be blessed