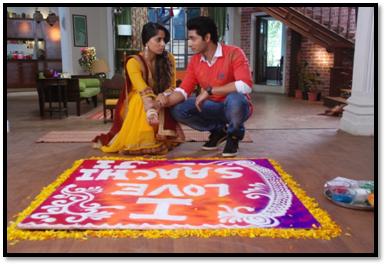 TV show 'Kehta Hai Dil... Jee Le Zara' has seen a lot of twists and turns in the past, and now the lead protagonists will have to cross another hurdle.

After the couple got the green signal from Saanchi's family, Dhruv takes her to meet his family.

While Dhruv is chilled out and relaxed about introducing Saanchi to his parents, his lady love is nervous as hell.

Saanchi meets Dhruv's father, played by Amit Behl, who wishes to speak to her alone for some time. During their small meeting, Saanchi is humiliated, insulted and is asked to leave Dhruv.

What will be interesting to see is if Dhruv's father is able to stop these love birds.

AADHIDEV 6 years ago Thanks for sharing the news. Serial is rocking

uppaas 6 years ago LOve this show and DV...LOOKING FORWARD to sarav wedding in near future

Mehek25 6 years ago Love ruslan mumtaz and sangeeta ghosh and also the show.

Shee_xaan 6 years ago Love u ruslaan mumtaz and sangeeta
gosh

kavmuks 6 years ago Looks liked DV does not know his family well..

Shamsaaa 6 years ago i just hope she dont lost hope after what his father said to him rather than being sad and all this i want her to fight for her love !:D