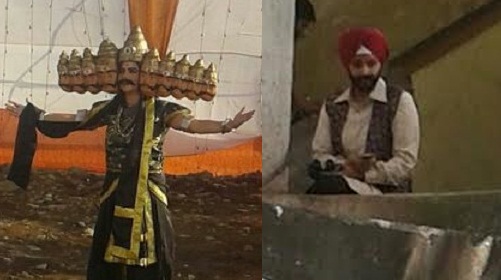 Good looking actress Gurdeep Kohli who is currently seen in Star Plus' popular show Diya Aur Baati Hum as Maya has added a feather in her cap by donning different looks in the ongoing shows. Yes! Its first time that a female actress in this show has disguised herself in so many characters.

As seen in the show, Gurdeep entered the show by donning the look of Raavan and she got so much into the character that the audience at first glance were not able to recognize the real face of the person. Later she was seen in many looks like that of a Dancer, Pani Puri Wala Bhaiya, A Widow, Rajasthani girl and more. Now soon she will be seen in a Sardar's look.

We got in touch with the actress Gurdeep to know her experience about donning different looks and she says, "I have always done different kinds of roles. I always tried to do something new, I have added a feather in my cap. Thus Maya's role is very different and challenging as I have to disguised myself in a different character and has to get into the skin of all the character."

She further adds, "In all daily soaps it's a monotonous day for all the actors, but for me it is a new day every day. Recently as I have donned a Sardar's look, I feel that I am at home as I am a Punjabi. When I was young I used to wear my brother's or uncle's pagadi but for the first time I got a chance to don a proper Sardar look with a beard and mustache. So yes I happy playing Maya's character."

TellyBuzz wishes all the best to Gurdeep Kohli!

+ 2
6 years ago Gurdeep Kohli u still look so pretty!

6 years ago Gurdeep u r rocking as Maya