to judge NACH BALIYE 3 on STAR PLUS!
~Adds excitement to your lives from Friday September 21, 2007,
8 pm onwards~


The action just gets hotter on Nach Baliye 3! The gorgeous Ishaa Koppikar, today’s leading choreographer Vaibhavi Merchant along with a 3rd SOMEONE who is witty, candid and one of the biggest names in Bollywood! Together they will decide the fate of the 10 hottest couples, every single week on Star Plus’ Nach Baliye 3. Helping these judges in their decision would be the entire nation as ‘India ki Junta’ who will vote for their favourite Nach Baliye Jodi! All this dhamaal begins from FRIDAY, SEPTEMBER 21 at 8.00 PM ONLY ON STAR PLUS. 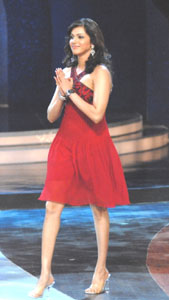 
Ishaa Koppikar - The Diva…the beauty…the splendor… and that’s exactly what she is going to be a judge of. Her sharp eyes are not going to miss a thing that the couples will display! 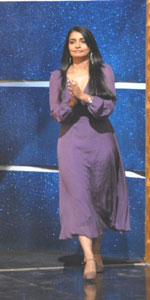 Vaibhavi Merchant - From Dhadak Dhadak to Dhoom to Kajra Re and now Jhoom Baraabar Jhoom… Vaibhavi has the country dancing to her tunes… now it’s the turn of the jodi’s on Nach Baliye 3!


So get ready to be a part of the tension, the apprehension and the nail-biting moments with your favorite stars on Nach Baliye 3, from Friday September 21, 2007 at 8 pm on Star Plus.

14 years ago Vaibhavi? Cool! I wonder who;s the third one?

shweta1 14 years ago hi.txs for sharing but i like mallika and saroj khan but its ok/i think the third judge will be a male .as it is the tendency of nach baliye to take 2 women and 1 men.i think tht the 3 judge is a male judge i thk it is david dhawan but not sure.

+ 5
14 years ago thanks soo much, i think the third is meant to be some director... hmm lets see who ends up bein the 3rd judge

+ 2
14 years ago wow!thanks for sharing!will miss saroj though and gorgeous malliaka

14 years ago hey, does this only start in india or also in uk on the 21st - 8pm?
coz there aint any ads yet!!
thanks anyway!

+ 2
14 years ago mmmmmm i am sure its a male director.i heard its david dhawan too..but well i guess we'll have to wait till 21st to see who it is actually!!!
nice article!

14 years ago the 3rd one will definitely be a male director....