View Profile
Since the movie Dev.D was released, the term 'emotional atyachar' has more or less entered our social lingo. The phrase has been used as the title of a TV show and now we can see it as a title for a soon to be releasing film as well! The upcoming flick starring Kalki Koechlin, Ranvir Shorey and Vinay Pathak, however, is now facing some 'emotional atyachar' of its own. 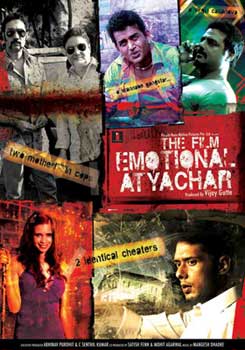 Apparently Producer Vijay Gutte is being taken to court by the channel on which the TV show Emotional Atyachar is being aired. A representative from the channel says that the film's title is tremendously similar to the TV show's title, although Vijay clarifies that his film is in fact titled The Film Emotional Atyachar. Consequently this is the title which has been registered with the Indian Motion Pictures' Producers Association (IMPAA).
Vijay feels that the channel should have approached him personally if they took offense with the title of his film. He says that the IMPAA would not have granted him permission to use that title without first checking with the channel, and it does not make sense for the channel to ask for compensation of Rs. 50 lakh. He cannot change the title now as too much has been invested into the movie and the rights have already been sold to Roopvati Pictures. So, all he can do is refer the complaints to the picture house!
Emotional Atyachar for (The Film) Emotional Atyachar indeed!