They got engaged amid much fanfare on national television but item girl Rakhi Sawant is worried about her Toronto-based fiance Elesh Parujanwala.

She is worried about him accepting her sexy image, his financial independence and, above all, she doesn't want him to be just known as 'Rakhi Sawant's husband'. 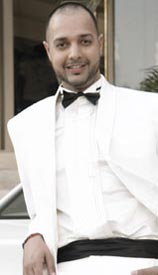 Featured Video
'Will Elesh be able to support me financially? I don't want him to be known as Rakhi Sawant's husband. I need time.

'I agree Elesh is educated and he comes from a wealthy family. But all of it belongs to his father. He has nothing of his own in Mumbai, not even a home. He needs time to settle down,' Rakhi, who selected Elesh through NDTV Imagine's reality show 'Rakhi Ka Swayamvar', told IANS in an exclusive interview.

She is also concerned about Elesh being comfortable with her sexy image.

'People are spreading dirty rumours about me. On the Internet they've morphed my face on naked bodies. Would Elesh be able to tolerate it?' asked Rakhi.

She is also disgusted by singer Mika's attempts to gain mileage out of her name.

'I'm really tired of people using my name. I don't want to give such people importance. I've learnt the hard way how to be dignified. Jesus has taught me to be calm. My good days are just beginning.'

'I don't want him to be another Abhishek Awasthi (her ex-boyfriend) in my life. Yes, we're engaged. I like him a lot. But how can I hand over my life to someone who isn't earning a proper living?

'That's why we're going on another reality show to see whether we're really as compatible as we seemed on 'Rakhi Ka Swayamvar'. I didn't get enough time with him on that show. You and I saw his best face. Now I want to see the real Elesh.'

Her new show 'Pati Patni Aur Woh', which is likely to be aired next month on NDTV Imagine, is about parenting.

'I want to marry a man who can support me. In India, wives are supposed to be looked after by husbands, not vice versa. I don't want him to come and stay in my house. I want to live in his house. I will wait for him to afford a house.

'I know Elesh is a decent guy. But is that enough? He has to be financially independent. He needed a place and a face to latch on to; that's why he came on the show. Abhishek was so decent. But he was known as Rakhi's boyfriend.'

Rakhi's new show is about parenting, but kids give her a headache.

'I've a migraine problem. When a child cries, I get a severe headache. I don't know how I'll manage for a month with a stranger's child.

'On top of that I've to cook on the show. I can't cook to save my life. I don't know how I'll manage. I can't even use make-up. Can you imagine Rakhi Sawant without makeup?' she said.

Asked how she'll cope when she has her own kids, Rakhi replied: 'Apna bachcha to har koi paal leta hai...jaanwar bhi. I don't know how I'll cope. I think I'm going to lose my cool completely. So far people have only seen the good Rakhi Sawant. Now they'll see the real me.'

Speaking about ex-boyfriend Abhishek, she said: 'I still consider him my good friend. I hope and pray he finds a good girl. If ever in life he needs me, I'll always be there.

'If he needs me to be a dance partner in a reality show I'll gladly do the needful. He has supported me a lot. I'll always be thankful to him for getting my mother out of my life. That's one good deed he did. If Abhishek hadn't been there, I'd have not had the courage to break away from my family. I'd have been wallowing in mud.'