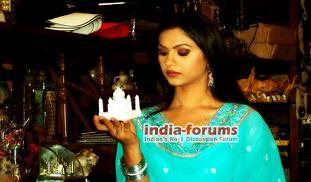 Marking a departure from her earlier shows which were always based in India, Ekta has now chosen to make a story of two families who are settled abroad - Dubai to be precise. The protagonists are Aafrein (Priya Bathija)- a simple but strong minded girl, and Kabir Khan ( Sumeet Sachdeva)- a rich ideal boy. The poor girl meets rich boy, they fall in love and never live happily thereafter.

So, what is new? Is the story any different from the scores of Balaji shows on and off air right now, one is compelled to ask. " It's a family drama, and has all the requisite ingredients, " elaborates the handsome lead of the serial, Sumeet. " I have a romantic interest in the
Featured Video show", he continues. " It will have everything that any other show has, the only thing that is different is that it is shot in Dubai."


Is the role different from Gautam of Kyunki? " Gautam has been an intense character, and has played all shades, ranging from good to bad. Kabir is a much more mellow character, one who is always in control, does not rise to aggravation easily," explains the actor.

How has it been working with the new lead - Priya? "It's been nice. We have many newcomers, and a lot of energy on the sets. In fact I have just come back from Dubai and we shot there extensively", gushes the versatile actor. " We had a gala time shooting with many middle eastern artists, and it was an enriching experience." The star cast includes the very experienced Anju Mahendroo, along with many other accomplished Indian and middle eastern artists.

Will the serial touch a chord? Only time will tell. Right now the notes of optimism are hard to miss. Understandably, the frames are going to be glossier, the costumes gaudier ( if that is possible given the shine and sparkle of all the existing garish and flashy Balaji serial costumes), and the drama, heavier.

With all the promised glitterati and glycerine, are we possibly looking at another trp topper ?

Yes even I feel that she is exellent producer in the industry.....

+ 2
15 years ago Hmm...not a new story but still will be worth a watch. I saw the promo and it looked nice, but only time will tell.

15 years ago sounds interesting. Lets c... only time will tell

15 years ago i dun kno ny is she repeating d same story in all strials!!anyways GOOD LUCK!!2 ekta !!

15 years ago the girl is cute... but its gonna b something along the lines of kumkum..i think...coz the other lead is kabir's younger and fav brother azaan... who already has a girlfriend and has no dea big bro is falling for afreen...hmm i think i just gave everyone a synopsis..lolz..

+ 6
15 years ago For the first time Ekta's shows has come up that the pair will fall in Love n never live happily thereafter.

i will watch this show
when is it airing?

15 years ago i like sumit but hope this show will be different from earlier balaji shows.

+ 5
15 years ago omg!! this is the show which neha rejected...remember when Neha said she was offered a role from Ekta, but it needed her to go and live in dubai and the story was going to be shot in dubai...so wow this is the show Neha would have been in...glad she didnt take it, because we get to see her in Maayka more sooner