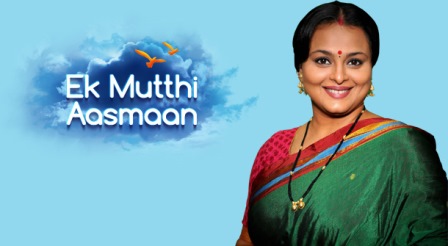 As these days many TV shows are grabbing the eyeballs of the audiences and due to their popularity some of the shows even rule over the hearts of the audiences. With the increasing popularity and the number of shows, many shows are axed from their repeat telecast slot to ensure that the new show is promoted well on the channel.

While reality shows rule over the weekend slot but still their repeat telecast grab maximum attention of the viewers. Well, in the case of Ek Mutthi Aasmaan which airs on Zee TV has its slot fixed at 7.00 pm and its repeat telecast was fixed at 11.30 pm. However, the channel made few changes in the late night slot and thus the show was axed from its repeat telecast slot. In the meantime a new comedy reality show Gangs of Hasseepur was aired during the late night slot as they wanted to promote the show so the channel decided to give the re-telecast slot of Ek Mutthi Aasmaan to Gangs of Hasseepur.

But due to the huge demand of the audience the channel has decided to give back Ek Muthi Asmaan the 11.30 slot again. It will be effective from 19th May onwards and the show Ek Mutthi Aasmaan will air at 11.30 slot.

The lead actor Ashish Chowdhry who is seen as Raghav Singhania in the show has also tweeted that, "So I'm told that coz of 'Huge Demand' which I think comprises of HUGE #Twamily demand, d 11.30pm repeats of #EMA r back on air from 19th May!"

KLDiva 6 years ago EMA used to rock but not anymore. story lines are getting from bad to worse! they need to fire and bring in new team of scriptwriters or it will be end of the show.

babli102030 6 years ago wonderfull actors one and all and also a beauifull concept...needs more repeats

k_durga_d 6 years ago Thanks for repeat telecast, Ashish&Rachana r doing a fabulous job,watching just coz of it!wish the writers had revenge in a unique way,marriage to pakhi is very common,does not suit the character of Raghav!