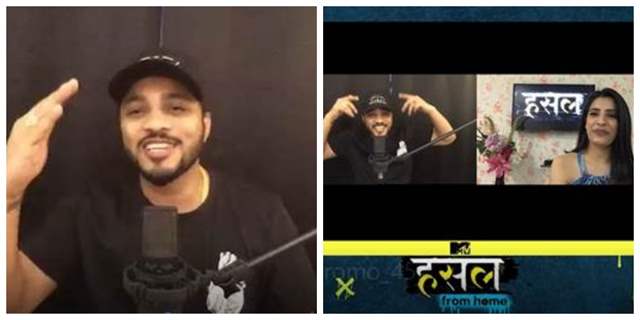 In this week’s episode of Hustle from Home, the dapper rapper Raftaar infuses a positive energy and encourages the mantra of ‘Each one, Reach One’. Helping at least one person around you who is in need, to the best of your abilities in the current situation. A special surprise awaits the viewers as the famous cop from Jammu and Kashmir, Jeevan Kumar, who has been creating a lot of buzz on social media for his rap videos, will be seen in this week’s episode. A frontline soldier and a police officer, Jeevan perfectly follows his duty and is determined towards the safety of the country, and at the same time, follows his passion of rapping.

Blown away by Jeevan’s rap, Raftaar goes gaga over his composition and in return, performs a rap for him as a special surprise. Raftaar will also be seen entertaining the viewers with a new song from his recently released album, Me and My Pen. And that’s not all, the energy level goes up a notch higher when the young and the sensational rapper, Brodha V joins in. Going down the memory lane and talking about their memories from MTV Hustle, the squad also gets into a fun Rapping Fire round. Adding an interesting twist to the round, Raftaar asks Brodha V to only rhyme in Hindi and takes on the challenge himself of rhyming in English. A complete laugh riot, this Rapping Fire round makes for an interesting watch for all the rap-enthusiasts!

There’s more to it! Watch Raftaar and Brodha V performing to their hit track “Naachne Ka Shauq” that will make you tap your feet while you’re sitting at home. Keeping up with the entertainment quotient, MTV Hustle runner-up and popular rapper EPR also joins for an epic masterclass by Raftaar, with the host VJ Gaelyn. Join in to groove to the upbeat rap, while you relax at home, only with MTV Hustle from Home, every Sunday at 7PM only on MTV.

Mohit Kumar: Surviving in Mumbai without work is tough; it's ...
34 minutes ago