Nath Villa. Night. A couple enters the villa with an intention of spending the night. But unfortunate for them, it’s the house where Kailash Nath (Amitabh Bachchan), oops, the spirit of Kailash Nath enjoys his days and nights in his airy appearance. Predictably enough, the couple, intimidated with Kailash, zooms away from the house. 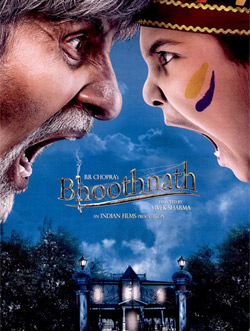 Next incident. Mr. Sharma (Shah Rukh Khan), a marine driver by profession, comes to Kailash’s den, with his family. He leaves his family behind at the Nath Villa and plods back to join his job. While residing in the Nath Villa, Mr. Sharma’s wife Anjali (Juhi Chawla) and son Banku (Aman Siddiqui) experiences strange incidents. In the mean time Banku befriends the spirit of Kailash Nath and names him as “Bhootnath”. Banku’s presence eliminates all the hazardous factors that polluted Bhootnath’s mind against human beings. One day, Anjali comes to know about Bhootnath being the angel in Banku’s life. At the same time Anjali comes to know from Bhootnath about the painful incident that made him a spirit. So, to let Bhootnath’s spirit free from the bondage with the earth, Sharma family arranges for a shradh, a Hindu tradition that Bhootnath’s son, Priyanshu Chatterjee, avoided in past. Ultimately, it’s through Banku that Bhootnath gets his desired freedom from the earthly bondage. But it’s because of Banku’s love for Bhootnath that the amicable ghost leaves Banku with an option of appearing in front of Banku whenever he wishes from the core of his heart.

Even god changes his mind for the sake of true and honest love. This film is not about the triumph of a child but the success of true love and faith.

It’s the second time where Amitabh is posing as a ghost and his look in “Bhootnath”, though unintentionally, reminds of his look of Gabbar Singh in “Ram Gopal Verma Ki Aag”. If that is some bad news, the good part is that his acting always sweeps away the feeling of looking alike. At the same time his intimidated being with the presence of his son lets audience recap his character in “Baghban”. Aman Siddiqui has depicted Banku’s character very well. Juhi Chawla and Shah Rukh’s couple still reminds the same freshness that they show in their very first film. Writer-director Vivek Sharma has proved his prowess in his job. His beautifully mingled presentation of entertainment and spirit has started a new vogue in Bollywood.

If “Bhootnath” is not so well a children film as “Taare Zamin Par” was, it definitely helps spending few hours in the air conditioned theaters while summer is blazing outside. At last, if not the least, children may well accept the line of Amitabh saying, “Zindegi me jadoo nehi, mehnat se safalta pai jaati hai” (success is all about hard work, not magic). Bingo Bhootnath!