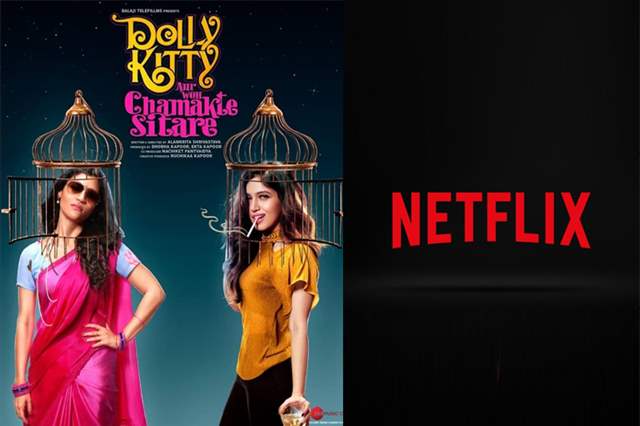 In wake of the current pandemic, one of the most surprising yet necessary things over the past couple of months has been mega films either announcing or finall releasing on streaming platforms. First in the list was Gulabo Sitabo that arrived on Amazon Prime Video which was followed

by the announcement that some other big films will also be released - including Vidya Balan Shakuntala Devi at the end of this month.

However, the biggest announcement came in from Disney+ Hostar that huge films like Laxxmi Bomb, Bhuj - The Pride of India, Sadak 2 and a few other films will also be making to a direct to OTT release on Disney+ Hotstar. One might wonder and question that a streaming giant like Netflix which has anyway found itself struggling with Indian content, isn't even in this conversation yet.

It seems that has arrived now albeit with just one film in the kitty (see what I did there?) The streamer has bagged the rights to release Ekta Kapoor's film Dolly Kitty Aur Chamakte Sitare starring Bhumi Pednekar and Konkona Sen Sharma. According to a report in Bollywood Hungama, a source said  “Since May, the team of Dolly Kitty Aur Woh Chamakte Sitare has been talking to various digital players, including Netflix, Amazon and Hotstar. After taking into consideration the monetary offers by all platforms, it was Netflix who bagged the film by paying the maximum amount.” The source in the report also continued to reveal that OTT platform Amazon Prime Video was also in the race to buy the film considering that director, Alankrita Shrivastava’s last release, Lipstick Under My Burkha received some great response, but eventually, Netflix won the deal. Talking about the director Alankrita Shrivastava, the source said, “She also helmed Made In Heaven with Zoya Akhtar for Amazon. However, after a lot of discussions, her directorial finally went to Netflix.”

What do you think about this decision? Leave in your comments below.

Why Should We Watch Janhvi Kapoor's Gunjan Saxena?
5 minutes ago

The Bhatts were involved throughout: Ankit Tiwari on his ...
37 minutes ago