Rajita Sharma's Preet Se Bandhi Ye Dori Ram Milaayi Jodi on Zee TV has seen an increase in ratings after the introduction of Sara Khan as the lead protagonist. We hear that the channel is now looking for more spice in the story by bringing in Dolly Bindra to play an important cameo role!! 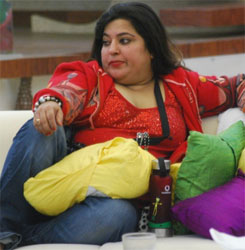 Yes, you heard it right!! Dolly Bindra whose loud presence catapulted the ratings of COLORS' Bigg Boss 4 will now be seen in yet another loud avatar in the Zee TV show..

Our source states, "Dolly Bindra has been roped in by the channel, and will play a character somewhat similar to her real self in the Bigg Boss house. She will be the NRI friend of Vimmi (Riva Bubber), who is Mona's mother. She is a full-on Punjabi lady and will get the shock of her life when she sees Anukalp (Nishant Malkani) to be the simple and silent Dulha of Mona. She feels that Mona deserved a Punjabi loud guy and Anukalp is too simple and above all, he is a Gujju. Her entry will kick-start troubled times for Anukalp".

We hear that Dolly Bindra has been brought in by the channel for a cameo role. However, if her entry excites the audience, the channel might plan to extend her role.

When contacted, Dolly Bindra refused the news saying, "I am in Punjab cooking Baingan ki Sabji. How can I start shoot for a show? I do not have any idea. You will have to ask the people who gave you this news".

We tried calling Producer Rajita Sharma, and even sent a text message to Sukesh Motwani, Fiction Head, Zee TV but both remained unavailable for comments.

However, our source confides in us that the channel is shooting for a special promo with Dolly today.. Her entry will be aired sometime next week, and the promo will be on air by the weekend.. With this, Sara Khan and Dolly Bindra share screen space yet again post their Bigg Boss stint.

Let's now see whether Dolly can add more spice to the already existing culture clash between the Punjabi and Gujarati families in Ram Milaayi Jodi..

sweet_angel27 9 years ago oh so sara and dolly will meet once again for the same show? lol

manoo.18 9 years ago after big boss i hate sara khan becoz i saw real sara who is soo fake.

abd_20 9 years ago Dolly has been approached for a show which Sara is playing lead in she will never accept...I think in real sense not anukalp but Mona aka Sara khan might be in a huge problem... if Dolly said jo bole sonihaal Saasriyakaaal... lolzzzz

sexypink 9 years ago I thnk slowly by slowly rajita sharma will brng ol da members of big boss in her bakwas serial.. Thnk God i stopped watching it!

brainychild92 9 years ago How will it sound if I say DESPO!!! Its kind of sad of u think if it... Fist falsely accuse an innocent debutante in order to get a well known actress to increase ir trps( otherwise she wouldn't of bagged 2 roles so quickly- that too of cameo n lead) now bring in the most hyped person who u no is going to show attitude- especially w. Sara Khan on the show!