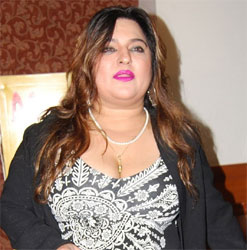 Dolly Bindra might have had a tough time at the recently held Gold Awards, but all fell in place for the Controversy Queen when she graced the Sangeet ceremony of Ratan in Imagine's Ratan Ka Rishta. We hear that she had full on masti on the set and enjoyed whatever she was doing. If that's not enough, the lady even impressed the Dance Guru Saroj Khan with her dance moves.

For the uninitiated, Dolly Bindra will be performing on an item number of Sheila and Munni choreographed by Saroj Khan. And in the sangeet, Saroj Khan got so impressed with Dolly's 'jhatke' that she gave her a cash prize of 501 rupees as Shagun.

We contacted Dolly who told us, "Yes I got Shagun from Saroj Khan and had a blast there. I always enjoy whatever I do; I danced my heart out and enjoyed every moment of dancing with Ratan's Dulhas".