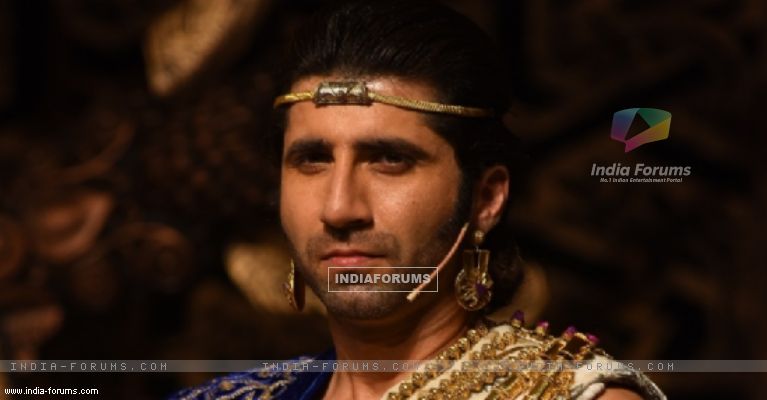 Actor Sumit Kaul, who has been featured in shows like Laagi Tujhse Lagan and Do Dil Ek Jaan, is all set to don a different look in the historical show Chakravatin Ashoka Samarat. Sumit, in conversation with us talks about his role, difficulties faced while shooting and more...

Tell us about your character in the show?

My character name is Justin in the show, the name itself sounds different because he is the mixture of Indian and Greek. His mother is Helena (Suzanne Bernert) is a Greek and she has married Chandragupta Maurya and I was cast for this role probably because of my looks which suits for this character.

About his character, I would say that he is born with a silver spoon and has got best in his life. Justin wants everything whatever he desires that's because he has been taught by his mother since childhood that acquire things in life by hook or by crook.

I don't see him particularly a negative one because he can't imagine anything other than being the king therefore he is extremely disturbed, troubled, frustrated and so. Basically it's his mother who is making him negative as she has her own ambitions which she is trying fulfill through his son. He may not be that ambitious but her mother is desperately ambitious wanting the throne for herself.

Justin is not only looking  for fun in his life but is also finding love and later he ends up getting his love and used by her. It will be revealed that how that will happen and it will be very interesting.

Audience sees Justin as anti-Bindusara (Sameer Dharmadhikari), anti-Ashoka (Siddharth Nigam) and is seen as an antagonist but personally I feel that he is a normal guy but born in an extremely affluent situation.

Where you aware about Justin before doing the role?

No, because when I started shooting I got to know that the history which we read is the basic like we know that he was a king and then he changed his ways after Kalinga war. We know almost things but we don't know the fact that Chandragupt Maurya was married to a Greek woman who was the daughter of Alexander's Senapati.

I was not aware about the character but I was very interested to know more about it because it gives me an opportunity to play a very different character which is an Indo-Greek character.

What difficulties you have faced while playing this character?

Doing a historical show is quite an eye opening experience for me because earlier I preferred normal roles and regular kind of shows.

But when this role was offered, it was irresistible because it was such a wonderful role, there are so many layers in the role. So, I said great and I started shooting for the role which is who  involved in wars and action sequences.

The toughest is that I will have to do action sequences wearing the attire which are so heavy with accessories instilled on it. So on the first day we got the training where they taught us those somersaults and jumps but that time we were in our normal clothes.

Finally we did that in our costume which is quite refreshing and a nice experience for us. It's been a tough one but still a great experience.

6 years ago this is only 4 sumit kaul, aka suds of ltl.one of the good friends of mishal raheja. luv u mishal.do hope that mishal watch ur show. besttt of luck.

6 years ago sameer dharmadhikari and namrata thapa missed so much

6 years ago sameer doing a wonderful job as king bindusara

+ 4
6 years ago Good Luck to the whole team of Ashoka.

6 years ago commeting only for sameer dharmadhikari...he is best