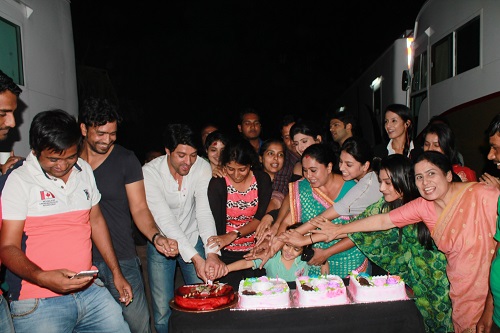 The storyline of the show has reached its peak point showcasing the sequence of a plane hijacking. The terrorists have hijacked the plane boarded by Suraj (Anas Rashid), Bhabo (Neelu Vaghela) and Chaturi (Rashmi Pitre) asking to free the terrorist Rajkumar (Gaurav Sharma). Last week the show gained a maximum TRP rating of 6.6 creating a history in Indian Television. The team is currently shooting its highpoint sequence in Latur.

Consistently maintaining a top position on the TRP chart, the show yesterday aired its 900th episode and the entire cast and crew celebrated this achievement by cutting a cake on the sets.

When contacted producer Sumeet Mittal, he said, "We all are very happy. It is truly because of the commitment and hard work of each of our team members that we have achieved this feat and received so much love from the audiences. And I am thankful to the entire team at Star for their endless support and belief in this show. I wish the show continues to get love and support from the audiences and we continue to entertain everyone with quality content."

TellyBuzz wishes the entire team of Diya Aur Baati Hum a hearty congratulations and wishes them best for their upcoming episodes!

6 years ago Anas Rashid and Deepika, our SoorajSandhya are the soul of this great show, CONGRATULATIONS once again :)

6 years ago Congratulations DABH!!
But, I want the old magic back!