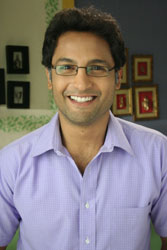 Diwakar Pundir, the popular father, Parikshit of Star Plus’ Santaan was in for a shock on 23rd August when he got a call at around 1.30 in the afternoon from his relatives that his house in Juhu was robbed by a group of men in broad daylight.

We called the actor to know more on the sad incident and he said, “My wife Anu had gone to her brother’s place at about 1.15 pm to the neighboring building when few men broke into the main door of our house, opened the cupboards and safe and flew with all the jewellery and cash. I think they had been watching my wife and entered right after she went out. They finished their task in 10 minutes and fled”. Diwakar adds on, "I was taken aback when my wife's brother called to inform of the theft. I immediately called my wife".

Diwakar Pundir told us that the cops and CBI are investigating the case. “The search is on, but we have not recovered anything till now”, confirms the actor.

We just hope police is successful in trapping the men so that Diwakar and his wife can recover their earnings and breath a sigh of relief!!

+ 5
14 years ago Thats so sad, hope they catch the culprits.

14 years ago awww... that's horrible! Hopefully they can find the culprits and get their stuff back!

14 years ago awww feeling bad for him...hope hw will back his things soon

14 years ago awww, soo sad!
wish he gets his things back!

14 years ago so sad to hear this news. hope he gets all his belongings.