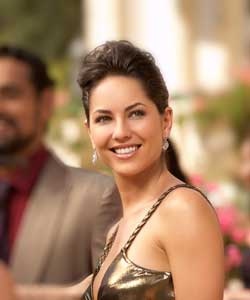 Latino actress Barbara Mori is said to be leaving India as a disappointed woman due to not having two of her wishes fulfilled.
The first, apparently, was her desire to see the Taj Mahal, which was made difficult by the promotional tours for the release of Kites, where she stars as a Spanish woman who falls for an Indian guy played by Hrithik Roshan.
The second reason for her disappointment was the hugely unfavourable response to the movie by Indian audience and critics!
Despite the movie grossing Rs 21 Crores on its very first day alone (beaten only by the opening-day grosser of 3 Idiots) and the rave reviews by US critics, the Indian audience felt let down after all the hype surrounding the movie.
So much so, that some screenings were even canceled in Bangalore after only the first day!  The busy actress, who was spotted flitting between several multiplexes and theaters in Mumbai as part of her promotional tour, hotly claimed that the movie was a "different experience" when faced with the negative feedback.
Apparently the problem lies in the fact that the movie is 90% in English and Spanish, leaving fans to muddle through subtitles for the majority of the movie and thus deterring the majority of the Indian audience from viewing it.  The heavy promotions and the repeated promise of a surreal cinematic experience may have attracted a large opening audience, but it seems as if the movie won't experience any long-running success, at least not in India!
For now, Barbara Mori is heading back to start her shoots in Venezuela before making her way back home to Mexico where she is all set to take the stage with a play.  However, the good news for her Indian fans is that the actress plans to return next year to shoot another film, during which time she hopes to squeeze in a visit the Taj Mahal as well!
6 Likes

Yeh Rishtey Hain Pyaar Ke: Mishti leaves Abir, how will he bring back ...

Rhea Chakraborty Walks Out of NCB Office; Leaves for Home Amid ...