Dimpy Ganguly Mahajan post her marriage with Rahul Mahajan, was busy appearing for her exams in Kolkata. But recently when she was approached for Imagine TV reality show Desi Girl as a wild card contestant, without a second thought decided to grab it with both hands. 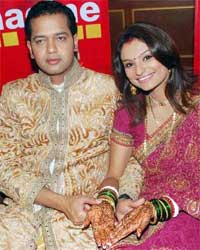 A little birdie informed us that, "Rahul Mahajan had personally come to Chandigarh to drop his dearest wife Dimpy and on seeing him his old buddies Sambhavna Seth and Monica Bedi from Big Boss were flattered."

But the interesting thing that happened post Rahul's arrival on sets could be quite shocking." After his arrival uncontrolled by her past feelings for Rahul since Big Boss, Monica Bedi aspired to welcome him with a cup of tea but due to Dimpy's presence she got so nervous that she took an hour to prepare a cup of tea", added our source.

"Also the fellow contestants are unhappy as well as jealous with Dimpy's entry in the show and the she would be entering the show this weekend", says our source.

So it seems as if it's going to be a battle between Rahul Mahajan's past and present on Imagine TV's Desi Girl.

10 years ago One more cheap gimmick to prop up a cheap show.

cutesapna 10 years ago gud...ove u dimpy
nw i will surely watch the show
nice to see u bck

jaya.dixit 10 years ago she anyways has nothing great to do in her life.

+ 2
10 years ago i knew this girl is for publicity, i hate this show anyway

+ 4
10 years ago Interesting to see how Monica and Sambhavna react to her lol... Rahul looks so fatigued in that pic lolz...

10 years ago She is not even a celebrity...why does imagine always try to make stupid ppl a celebrity like rakhi's so called fianc and now her...boooo to them and I would prefer anmol over this girl

+ 2
10 years ago What happened??Wasn't marrying Rahul enough that she has to do reality shows now??