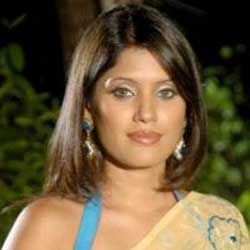 A source says, "Dimple will enter as Veer's (Mehul Nisar) wife and she will play the character of Priyanka. There will be a mysterious track behind this character."

"There is a secret room and a book in Sawarna Bhawan with which is attached a mystery that Abha (Suhasi Dhami) and Karan (Karan V Grover) will find out", adds the source.

We also hear that the coming episodes will see some paranormal activities happening in Swarna Bhawan.

We contacted Dimple who confirmed the news saying, "Yes I am entering as Priyanka who has a mystery behind her. But as of now, I can only say that Priyanka is a sweet girl and she gets married to Veer as many girls have rejected him."

Dimple will start her shoot tomorrow and the episode will be on air in the coming episodes.

+ 7
9 years ago She is a good actress and hate her for being bad.. haha

+ 2
9 years ago this track sounds interesting..but hope that the new entry doesnt bring abha karan seperate!!...hope she is a positive charakter!

9 years ago I m also excited to watch show. Love u so much Karan V. Grover...

9 years ago i believe her role will start of as sweet and good, but then turn into negative...

im not liking the paranormal activities that are occuring in the show...its just not matchin with the theme of the show...i just want Karan and Abha to have a nice happy life along...
if this continues for a long time, im gonna take a break from YMGGK

KW_lovez 9 years ago looking forward for a positive track..hope priyanka is positive...

+ 2
9 years ago I remember her from another show that use to come on Sony! Really excited to see her! She's really pretty though!

+ 4
9 years ago This is the first time I'm watching her in a show, but her character does look promising. And like everyone else mentioned, I hope she's positive.

Just so excited for this track to unravel. It looks sooo interesting!

+ 2
9 years ago Yes!!! She looks like Shaili!!!! Hope she's not like her though,and as they said she's the sweet one who actually accepts Veer,while he is rejected by many...I'm excited for the ghost/mystery track,Veer's wedding and the new entry

9 years ago well...i think she looks like shaili...what if she is shaili's sister?

9 years ago can't wait for veer to get married. seems like this woman and mystery door are connected.